3 dead as trailer overturns on matatu with passengers

The accident on the Eldoret/Webuye highway involved multiple vehicles 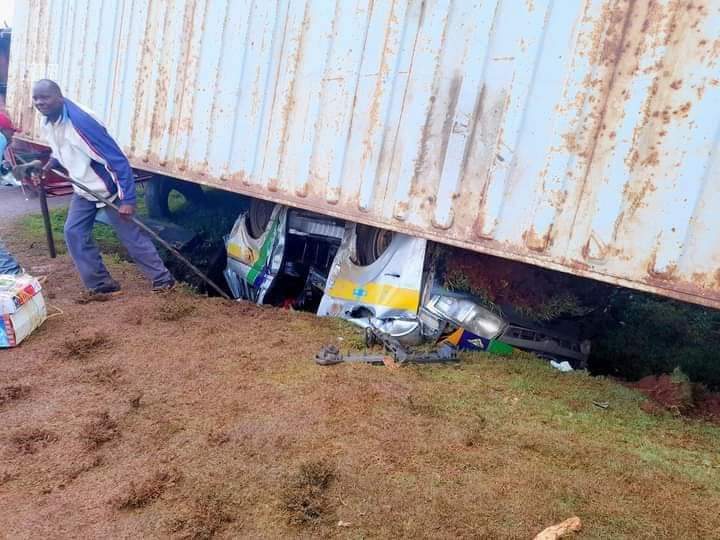 The trailer that overturned on the matatu in Webuye
Image: The-Star

Four automobiles were involved in a series of horrific incidents near Kosachei along the Eldoret Webuye Highway with three fatalities have been confirmed.

Two Nissan Matatus and two trucks were involved in the collision. The accident happened after a lorry traveling toward Webuye was struck first by a Nissan matatu, according to Uasin Gishu police chief, Ayub Gitonga.

The second truck rammed the matatu into a ditch, trapping the people inside. The majority of the injured were whisked away and transported to hospitals.

Gitonga reported that the accident had left more than ten persons injured. The incident has significantly backed up traffic on the highway.

Last month, the government revealed that 1,968 persons died in traffic accidents from January to May which was a 9.3% increase over the number of fatalities reported during a comparable time in 2021, with pedestrians accounting for the majority of the fatalities.

According to the saddening figures, at least 30 Kenyans have died on the country's roadways in the past week.

The figures were released shortly before NTSA activated the Integrated Transport Management System (ITMS) in order to address the rising number of road accident cases.

He said at the time, "At the end of June, we'll roll it out over the whole country, giving police smart applications to enable them automatically collect important road data for easy action.

The new program will include, among other things, having contemporary speed limit checkers and certifying legitimate driver's licenses," he continued.