Father of 18 from Busia buys coffin for a 3rd time

• The father of 18 has decided on such a bizarre action and is said to have bought a coffin worth 58,000 shillings.

• In the past, he bought the other two coffins on separate occasions; in the years 2009 and 2012 respectively. 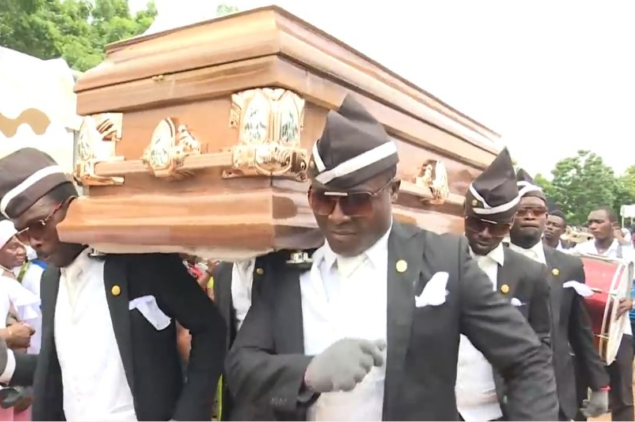 Healthy individuals are known to plan their lives for a better future. But have you ever heard someone healthy and hearty buying a coffin they are going to be buried in?

This is a real story of an 87-year-old man from Teso South Constituency in Busia County who has for the third time purchased his own coffin.

The father of 18 has decided on such a bizarre action and is said to have bought a coffin worth 58,000 shillings for his final send-off and has stored it at his shop in Obekai area.

Nevertheless, he bought the other two coffins on separate occasions; in the years 2009 and 2012 respectively.

While rehearsing inside the brand new coffin for his future burial, Aloise Otieng’ Ng’ombe said the other two were old-fashioned and they should immediately be used as firewood.

It has sparked confusion among people that live around the area and interestingly he is neither dying nor unwell. For Mzee Ominang’ombe, there is a message behind every deed.

Although the idea seems completely bonkers there's actually a reason behind why he did it, “I want this to go as a lesson to my community at large."

You may lack basic needs when you are alive. But when you die, people will slaughter bulls, and buy you nice clothes and shoes yet you will be long gone.

"That is why I decided to plan for a send-off befitting my status in society,” he said. The move he has pulled has elicited mixed reactions, with some supporting his decision. Others however opposed the old man's plans.

"He has reduced the burial expenses when the time comes.I see nothing wrong with what the old man has done," a resident remarked.

"The money could have been used to organize for a crusade or two which might have saved several souls heading to hell priority is no coffined at the moment," Michael a resident said.

"I do not see why one should buy their coffin. This is akin to calling on the angel of death," another lamented. Funny enough, it is said that it's completely legal to purchase a casket before you die. It's one way to accept your own mortality.

Winnie Odinga- "That coffin was being carried like a sack…There are guys carrying it, taking it I don't know where...But before we closed the coffin ...
Politics
1 month ago

Belgium handed over the last elements of the hero's corpse, a tooth, to his family.
Politics
1 month ago

With his head bowed, Sean Andrew walked away from his grandpa Mwai Kibaki's grave with sadness engulfing him.
Politics
3 months ago
WATCH: For the latest videos on entertainment stories