'It was a tough rally...' Kenya’s Maxine Wahome shines at the WRC Safari Rally

• Maxine says her next assignment is the the African rally championships and that is what she plans to focus on as she aims for an even much better performance. 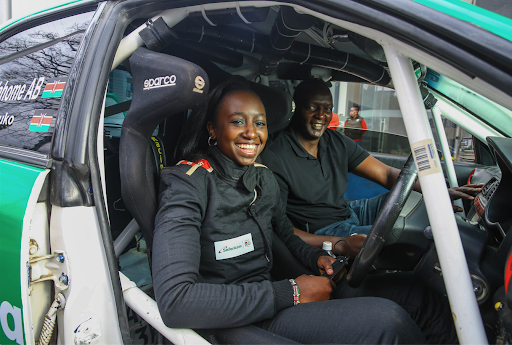 "I am very excited about finishing the rally which is among the toughest in the world. I am grateful to my team for supporting me through the preparations and the rally itself. I am also grateful to my sponsors for giving me the privilege of being the only female driver who competed and finished at this year’s WRC Safari Rally. I hope more women will compete next year and we can make history," said Maxine Wahome.

She added, "It was a tough rally extremely tough one especially for me with a brand new car but my goal was to learn the car, take every day take it step by step that's what brought me here."

Maxine says her next assignment is the African rally championships and that is what she plans to focus on as she aims for even much better performance.

She thanked her sponsors for supporting her saying she is happy to have made them proud and looks forward to working with them even more.

Other WRC/FIA Rally Star Program drivers Jeremiah Wahome navigated by Victor Okundi and McRae Kimathi navigated by Mwangi Kioni in Ford Fiesta R3 finished 19th and 21st overall in a time of 5.45.49 and 5.55.59 respectively with Hamza Anwar retiring at the 18th stage due mechanical problem.

Elsewhere, Kalle Rovanpera clocked 3.40.24 to become the youngest driver to win the Safari Rally after clinching victory in the sixth round of 2022 World Rally Championship in his Toyota GR Yaris.

If she has a male bestie she says she is hanging out with this weekend, boy do I have news for you. She is in Vasha
Lifestyle
1 month ago

“We have heard cases of spiking of drinks and this comes to individual responsibility as police cannot be manning who you are drinking with,” ...
Crime
1 month ago