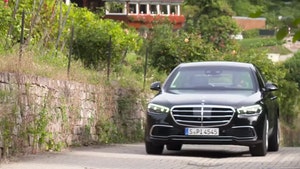 Mercedes-Benz has informed owners of its luxury cars of a technical defect that could spark a fire
Image: REUTERS

Mercedes-Benz (MBGn.DE) is recalling almost a million older cars from around the world due to possible problems with the brake booster, the company said on Saturday.

"We have found that in some of those vehicles, the function of the brake booster could be affected by advanced corrosion in the joint area of the housing," Mercedes-Benz said in a statement.

This could result in an increase in the brake pedal force needed to decelerate the vehicle and/or to a potentially increased stopping distance, it added.

The National Highway Traffic Safety Administration (NHTSA) said the German automaker was issuing a voluntary "do not drive" recall because of potentially corroded brake boosters that could severely affect braking capability, increasing the risk of a crash.

In January, Daimler's Mercedes-Benz had informed owners of its luxury cars of a technical defect that could spark a fire, adding a recall was not possible because parts needed to fix the problem are not available.

The issue was traced to possible leakage in the coolant pump that could heat up components, Daimler said.