We had to put baby’s remains in fridge-Couple

It culminated in them doing something unfathomable.

• Laura and Lawrence knew there was something very wrong when Laura started bleeding profusely almost four months into their pregnancy.

• Eventually, they were taken into a bay where Laura was told she would need surgery to remove the placenta. 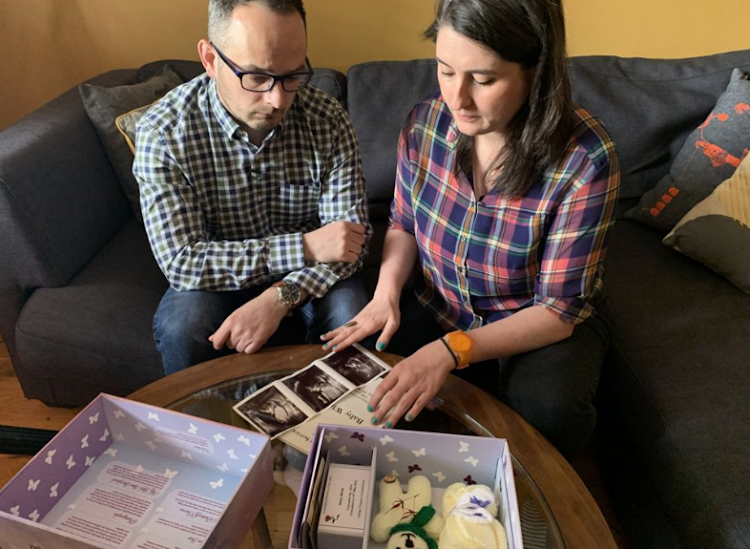 Laura and Lawrence keep a memory box to remind them of their son
Image: BBC

Sitting at the kitchen table, sometimes with their heads in their hands, Laura Brody and Lawrence White recount the "hell" that unfolded the day they lost their baby.

It culminated in them doing something unfathomable.

"I took a tupperware box containing my baby's remains home from hospital in a taxi, cleared up some space in our fridge and put the box in there," says Lawrence.

The couple had gone to University Hospital Lewisham's A&E department after Laura had a late miscarriage at home.

But they were advised there was nowhere safe to store the baby's remains, and they felt their only option was to take their baby home.

Greenwich and Lewisham NHS Trust says a full investigation is under way into the events that happened a couple of months ago. But the case has raised wider concerns about miscarriage care in the UK.

Laura and Lawrence knew there was something very wrong when Laura started bleeding profusely almost four months into their pregnancy.

They went to the early pregnancy unit at University Hospital Lewisham and were advised their baby still had a heartbeat and that all was well.

But days later, after another scan, doctors confirmed their baby had died.

The couple were sent home and were told to wait for a bed to become available for Laura to give birth to their dead baby.

Two days later, Laura woke up in severe pain. She ran to the bathroom, and that's where she delivered her baby.

She said at first she hadn't understood what had happened. But as she removed what had fallen into the toilet, she realised it was the remains of her baby.

She screamed, and in utter panic ran out of the bathroom, closed the door and told her partner: "Don't go in there."

The couple dialled 999 but were told it was not an emergency. So they wrapped their tiny son's remains in a wet cloth, placed him in the box, and made their way to A&E.

They say when they arrived, it was total chaos.

"We were put in the general waiting room and told to sit at the back," said Laura.

"I was there holding my baby in a tupperware box, crying, with 20 or 30 other people in that waiting room."

Eventually, they were taken into a bay where Laura was told she would need surgery to remove the placenta.

All this time, the couple say, their baby remained in the box in the hot and stuffy A&E department, with staff saying there was nowhere safe to store him.

"Nobody would even open the box and look at our baby," said Laura.

"It was almost as though no-one wanted to acknowledge it. Because if they did, then they would have to deal with the problem," added Lawrence.

It got to midnight, and they decided they had no option but to take their baby's remains home.

"There was no-one at the hospital willing to take charge of our baby. No-one seemed to know what was going on," said Lawrence.

"Our baby had been in a hot room for nearly five hours now. So we decided together that I would take him home."

He describes going home in a taxi with the box on his lap.

"It was a lonely, surreal moment clearing space in my fridge."

In a statement, Lewisham and Greenwich NHS Trust said: "We are deeply sorry and offer our sincerest condolences to Ms Brody and her partner for the tragic loss of their baby and these traumatic experiences."

"A full investigation is under way to understand where failings in care may have occurred so that any necessary changes and improvements can be made."

The trust says it has met with Laura to discuss the actions it is taking in response to her experiences.

Laura and Lawrence got in touch with the BBC after seeing some of our special reports on miscarriage care around the world.

They say they are speaking out to try to ensure this doesn't happen to anyone else.

"It feels like there's no safety net when things go wrong with pregnancy," said Laura.

"And even with all the staff and experts working really hard, the processes are so flawed, that it just felt like we'd been tipped into hell."

There are national guidelines for all four nations in the UK, on how best to care for women who experience miscarriages.

But there are concerns staff are not being given enough time and training to understand them and put them into practice.

Prof Dame Lesley Regan, consultant gynaecologist and spokesperson for the Royal College of Obstetricians and Gynaecologists, said because late miscarriage was rare - it happens in around one in every 100 pregnancies - many A&E staff might not know how to respond.

She said: "I think late losses are much less understood, and some healthcare professionals find it very frightening."

Ruth Bender Atik, head of The Miscarriage Association, described Laura and Lawrence's case as "unbearable", but warned against assuming all care was "awful".

"There simply should be an available cold place in A&E where these pregnancy remains or tiny little babies can be safely, respectfully and carefully stored with clear labelling," she said.

However, Zoe Clark-Coates, of the charity Saying Goodbye, and co-chair of the government's Pregnancy Loss Review, said similar problems were not rare, and that some couples had been told to store their baby's remains over a weekend until hospitals could accept them.

Women are often advised to bring in their baby or pregnancy remains so that tests may be carried out to try to understand why the pregnancy ended.

Terence Creative has opened up about his wife, Milly Chebby, losing a pregnancy, a few years ago.
Entertainment
1 month ago

Our parents only learned of our pregnancy after miscarriage-Arrow Bwoy

Nadia and Arrow Bwoy parents learned of the 1st pregnancy after they miscarried.
Entertainment
2 months ago
WATCH: For the latest videos on entertainment stories