Why do people get tattoos of celebs on their bodies?

Some people have tattooed faces of politicians on their bodies

•Tattoos can be influenced by peer pressure, media exposure, or personal choices.

•Tattoos are prohibited by the bible in Leviticus 19:28, where it says “Do not cut your bodies for the dead or put tattoo marks on yourselves. I am the Lord.” 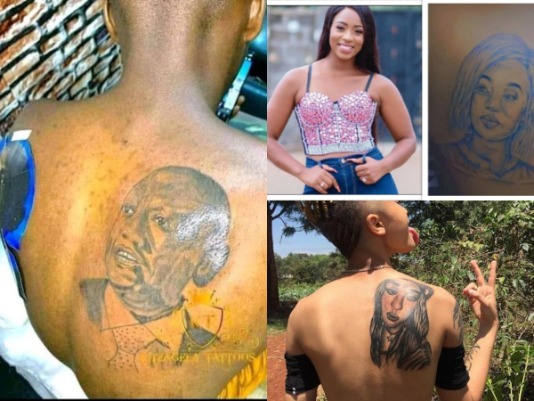 Celebrity Tattoos on the backs of their fans
Image: Instagram

Tattoo drawing has become a habit most people have embraced.

Unlike back in the days when having tattoos made one be labeled they have become a way of life and a way to create an identity.

Gregory Paul McLaren, who goes by the name of Lucky Diamond Rich is the man with the most tattoos in the world.

Rich has tattoos covering his entire body, including the insides of his eyelids, mouth, ears, and foreskin. He has held the certified record since 2006, being 100 percent tattooed

Below are some of the major reasons why people get tattoos

Peer pressure- The need to fit in a certain group might make one get tattoed.

Personal expression - They can be an expression of pain, sadness, or different seasons one might be going through in life.

Gang Uniforms- These are used by gang members to help them be easily identified by their fellow members or by the public.

Memoir- Can be used as a memoir when one loses a loved one, the tattoo can be in form of an image, name, or the date a person was born or died.

It can also be the day something significant occurred in someone's life.

Diana Marua promised more than what the female fan asked for...
Entertainment
1 month ago

Kajala dumped Harmonize when she found out he was propositioning her teenage daughter Paula.
Entertainment
1 month ago

Fan tattoos iconic Will Smith slap on his wrist

The memes weren't enough, a fan decided to imprint the Oscar moment on his body.
Entertainment
1 month ago

Carey has been married to Benito for over two years now and the two are blessed with a baby boy.
Entertainment
2 months ago
WATCH: For the latest videos on entertainment stories