10 bizarre beauty standards from around the world

• Beauty lies in the eyes of the beholder as is proven by the various beauty standards from all over the world. 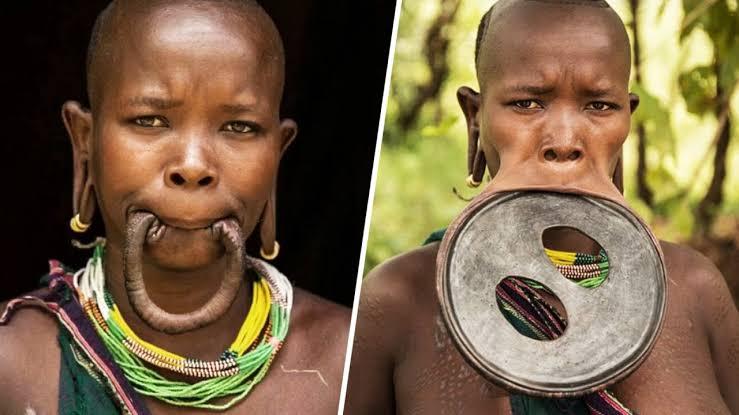 In the evolving world, the notion that having a voluptuous shape and tanned skin is the epitome of beauty.

This however is achieved through plastic surgeries and modern products to make these body adjustments.

Some cultures from different parts of the world practiced weird beauty standards to define beauty and as a sign of identity..

Below is a list of unusual body standards set by societies from different parts of the world.

They are commonly worn by women in Ethiopia from the Mursi tribe. When girls get to their puberty, plates are inserted on their lower lip until it stretches to the desired size. The bigger it is the more beautiful it is considered to be.

Its every girls  dream from the Kayan Lahwi tribe in Burma and Thailand to have a long neck decorated with a series of metal rings. As early as five years old,girls are fitted with decorative rings and overtime women can have as many as 25 fitted rings stretching their necks longer.

This is the act of creating patterns on the body by the Karo tribe in Ethiopia and the Dinka People from South Sudan as a rite of passage. For the girls they are marked with beautiful patterns unlike boys who gets three parallel lines as a representation of manhood. Despite being painful, the boys and girls are forbidden from crying or even flinching to avoid bringing shame to the whole family.

For the Masai women in Kenya stretching their earlobes is considered beautiful as they believe that the more stretched your earlobe is the more beautiful you are. For them they use heavy objects to stretch their earlobes such as tusks,wood and even stones.

During the 10 day vegetarian festival in Phuket,Thailand citizens celebrate the festival by piercing their cheeks as a way of chasing away evil spirits and [protecting themselves from bad luck.

In Indonesia,most tribes consider pointed and sharp teeth similar to those of a shark as beauty standard. The procedure is done without numbing hence causing agony and pain however women are eager to undertake the procedure in order to fit in and look more attractive.

Tattoos may be viewed as sign of rebellion by the western countries but to the Maori in New Zealand its an enormous cultural significance. For them, they decorate their skin, lips, and faces with distinctive black and blue patterns called Ta-Mako. This is especially practiced by ladies who will often tattoo their lips blue as a sign of beauty.

Having crooked teeth in Japan is considered beautiful as most women pay to get extra tooth to fit in. Through a procedure called "yaeba" women pay to get a snuggled-tooth look as they believe that the look provides them a more youthful look.

In Tajikistani,people believe that eyebrows that join together is considered a sign of beauty as well as  are a promise for a fortunate life.

In India,the Apatani tribe fitted bamboo strips as a rite of passage and also as a way of dismissing lovers from other tribes who had a habit of stealing women from their villages.However,the practice has not been carried out since 1970.

Why your cosmetics will cost more

Shortage of glycerin, a key ingredient used in many beauty products could push up prices in Kenya five-fold,  according to a major industry player.
Lifestyle
1 month ago

She spoke about body positivity and how people most people are comfortable with their body shape and sizes
Entertainment
1 month ago
WATCH: For the latest videos on entertainment stories