Why this obituary has gone viral!

Elizabeth is described as a unique and caring individual.

• The obituary gets interesting when it reads: "Mueni has now been reunited with her beloved father Anthony and her partner In crime, Peter and they can get up to their typical mischief where they left off. " 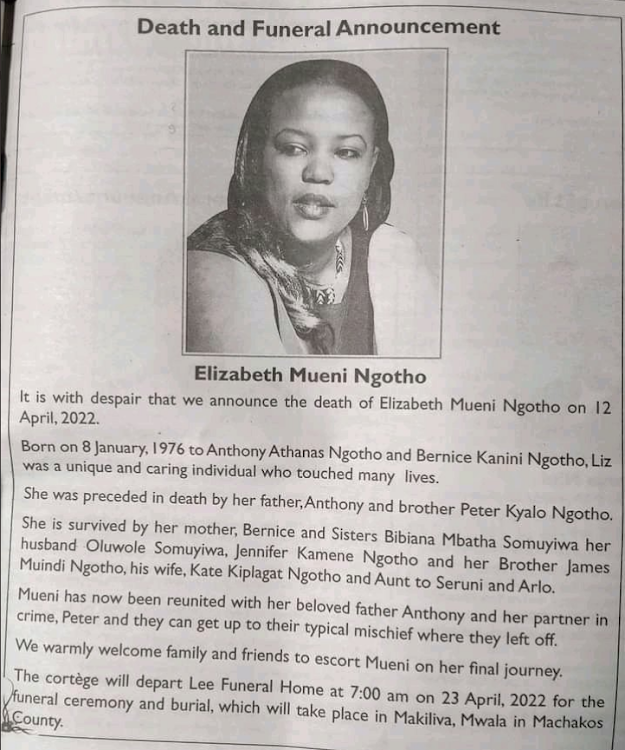 An obituary of a city woman has gone viral over the unique wording on the death and funeral announcement advertisement.

Elizabeth Mueni Ngotho's death announcement was posted on a local daily where she was described as a "unique and caring individual who touched many lives. She was preceded in death by her father, Anthony and brother Peter Kyalo Ngotho.

She is survived by her mother, Bernice and Sisters Bibiana Mbatha Somuyiwa her husband Oluwole Somuyiwa, Jennifer Kamene Ngotho and her Brother James Muindi Ngotho his wife. Kate Kiplagat Ngotho and Aunt to Seruni and Arlo."

The obituary gets interesting when it reads: "Mueni has now been reunited with her beloved father Anthony and her partner In crime, Peter and they can get up to their typical mischief where they left off. "

That has turned it into a viral obituary, like no other ever seen in Kenya.

KOT reacted to the announcement differents, some took it for being cute and quirky others thought it is in bad taste.

All in all, may Mueni's soul rest in peace.

KOT pointed out that the late was embroiled in a land saga that landed her in court.

According to a court ruling back in 2020 by Judge Angote in Machakos, Mueni was taken to court for not honouring a sales agreement for the purchase of a parcel of land known as Mavoko Town Block 2/4261 (Beacon No. 553) (the suit property) for a sum of Kshs. 630,000.

The suit reads, "The Plaintiffs averred that it was a term of the sale that after paying the deposit of Kshs. 300,000, the 1st Defendant would provide the Plaintiffs with the original title, Land Control Board consent forms, a copy of his national identity card or passport and photographs signed and dated at the back; that they paid the required deposit in accordance with the Agreement and that the 1st Defendant, in an attempt to frustrate the sale, has refused, ignored, and/or neglected to forward the said documents and instead has purported to cancel the sale and to refund the deposit of the purchase price."

The judge ruled against Mueni and ordered her to "comply with the terms of the Sale Agreement dated 6th October, 2010."

She was also asked to pay the costs of the suit.

Singer Debbie Asila is in mourning after the death of her mother on Valentine's day.
Entertainment
3 months ago

Turning in his grave! Drama at ex Kangema MP's burial

An obituary published in a local newspaper did not indicate the date of his burial service, but relatives said the family intended to hold a requiem ...
Politics
3 months ago
WATCH: For the latest videos on entertainment stories