Section of Eastern bypass to be closed for construction - KURA

• Motorists heading to Embakasi will be diverted to the slip road below the overpass. 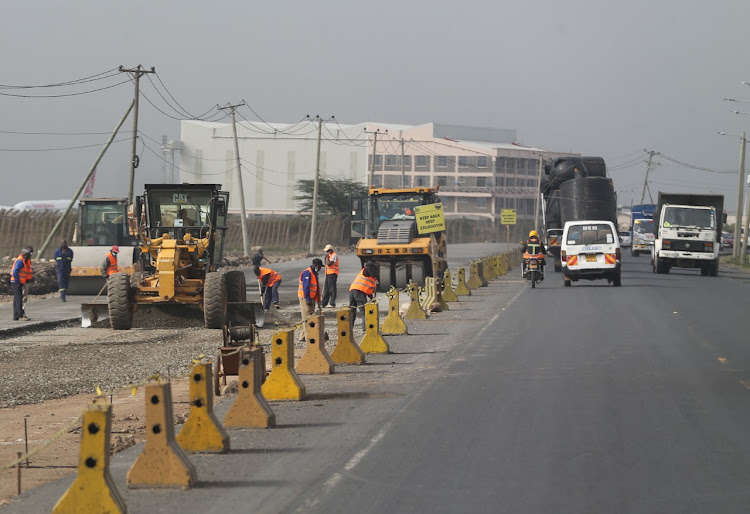 EASTERN BYPASS: Works along Eastern Bypass where the government is upgrading the 28km road to dual carriageway on February 22
Image: FREDRICK OMONDI

A section of the Eastern Bypass will be closed for two months to pave way for bridge construction.

This is due to the ongoing expansion and dualling of the Eastern Bypass.

In a public notice by Kenya Urban Roads Authority (Kura), the closure will take place from March 3 to May 3, 2022.

“Kura wished to notify the public that a section of the Eastern Bypass at the Kangundo Road junction overpass will be closed for bridge construction from March 3, 2022, to May 3, 2022,” reads the notice.

As a result, motorists heading to Embakasi will be diverted to the slip road below the overpass.

Kura has advised motorists and pedestrians to take caution when approaching this section and strictly follow diversions as guided by the traffic signs and the traffic marshalls on site.

“We request the public to be patient as we work to improve road safety and enhance urban mobility,” reads the notice.

With only four months left, the Eastern Bypass is on its verge of being converted into a dual carriage at a cost of Sh12.2 billion.

The 28km road starts at City Cabanas along Mombasa Road, linking motorists through Ruai towards Ruiru, passing over Thika Road to Ruaka, where it joins the Northern bypass.

The bypass was initially constructed as a single carriageway.

However, since the road was completed in 2014, considerable urbanization and commerce have emerged along its economic corridor, occasioning increased traffic volumes.

The Nairobi Eastern bypass dualling project was among 11 major infrastructure initiatives Kenya showcased to international investors during the Belt and Road Forum in Beijing, China, in May 2017.

Transport CS James Macharia said such an infrastructural project is beneficial to Kenyans as they create employment and promote local suppliers.

He disclosed that the Eastern bypass project has employed 660 youths for the dualling process.

The project will include the installation of other amenities like street lights and walkways along the bypass.

The CS said out of Sh12.5 billion for the Eastern Bypass, Sh5 billion was for the local sourcing of building materials.

“We insist on local materials and labour, this way the money will be pumped back into the economy,” he said.

Once the project is complete, it will be a relief for motorists because the road would ease traffic congestion.