He did not know it would go this way and end up claiming his life. - dau

• "He screamed for help upon seeing the men. When I heard the commotion, I woke up swiftly only to find my husband in the hands of the attackers," Isaac Juma's widow said. 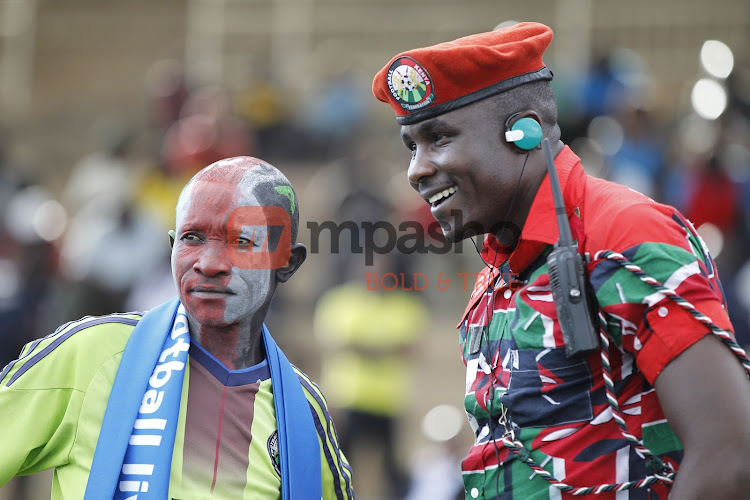 Late Isaac Juma during a past match
Image: Fredrick Onyango

Famous soccer fan Isaac Juma on Thursday 27, 2022, was allegedly hacked to death by his relatives in a land dispute in Mumias, Kakamega county.

Juma's widow Farida said her husband was "slaughtered like a cow" and accused his relatives.

Close relatives and nephews were accused by Juma's family.

Juma, 55, was a veteran supporter of the national soccer team,  Harambee Stars, and was also a fan of local league side AFC Leopards. He often painted his body and wrote slogans on it. He was a fixture at many matches.

He was slashed to death at his Ebuyenjere village in Mumias West sub-county by relatives over land, police said.

A suspect has been arrested and is assisting with investigations, they said.

“We have a suspect over the murder to help us know more,” Western regional police boss Peris Muthoni said.

Widow Farida said, "We were having dinner in our house and before we went to bed, we heard the sheep bleating on our farm.

"Upon opening the door, those men were waiting for him at the top of a tree," she said as she pointed at a tree.

"He screamed for help upon seeing the men. When I heard the commotion, I woke up swiftly only to find my husband in the hands of the attackers," she said.

"One was cutting his neck like someone who is slaughtering a cow. When he saw me, they ran away," she said.

"Isaac had told me he had issues over land in the area, and in case of his death, I should tell the authorities that it was because of a land dispute."

Juma died following an attack by an assailant at his home.
Lifestyle
3 months ago

Juma is said to have disagreed with his brother and sisters overland boundaries on Wednesday before he was attacked.

Neighbours said Juma brought government officials to settle a boundary dispute and his relatives were angered at government involvement.

Carolyn Auma, the deceased's second-born, said her father was attacked and killed by relatives whom she can identify.

She said that the Juma had argued with them over land.

"He did not know it would go this way and end up claiming his life. My father was a harmless person who could not harm even a fly. I don’t know why they had to kill him brutally like this," she said.

Neighbours said Juma had a longstanding misunderstanding with the sisters over land ownership.

Neighbour Catherine Nawire said she heard screams at around 10 pm and rushed to Juma’s compound where she found he had been slashed to death.

“Juma’s father died and his brother inherited his mother with whom he sired four daughters. They demanded to be given part of their father’s land.

"But Juma did not heed the requests. The land dispute has been outstanding for a long time," Nawire said.

Nawire told the Star Juma’s sisters felt his share of land should be the one that belonged to his late father and not their father.

"At one point, one of the nephews stormed his house and beat him up over the matter," she said.

Police on Tuesday arrested a relative who had attacked Juma.

His body was taken to the Butere Hospital mortuary for a postmortem.

Juma was a passionate football lover and religiously supported the Harambee Stars. He was among tens of fans who flew to Cape Verde to cheer the national team in an Africa Cup of Nations qualifiers in Praia in November 2015.

Juma is survived by two widows and 12 children.

Why Jua Cali is building mansions for his 3 children (Video)

Jua Cali says each child will have their own house.
Exclusives
3 months ago

Ringtone explains the source of his vast wealth, says he is not a land grabber

Ringtone became smart after falling out with big wigs in the music industry.
Entertainment
3 months ago

Actor Ken Gichoya, who acted as Njoro in Papa Shirandula, has fondly recalled how his mum pushed him to invest adding that today he is a landlord.
Entertainment
4 months ago