Police are investigating an incident in which a former LinkedIn Africa boss, Thogori Chege Karago, was found dead in her hotel room in Nairobi.

Karago’s body was found in her room at the Radisson Hotel along Waiyaki Way on January 21. She was 33 years old.

Police said they were called to the hotel, where they found Karago’s body lying motionless in her third-floor room.

Preliminary investigations show she had diabetes. The team that arrived at the hotel said they found it locked from inside, and the woman was alone therein.

An ambulance was called to the scene, and officials confirmed she was dead at about 5 pm.

Kilimani police boss Muturi Mbogo said the woman did not have any physical injuries at that time.

“There are indications she was diabetic, but that is subject to further investigations. For now, we take it to be natural and sudden death,” he said.

The body was moved to the MP Shah mortuary.

The hotel and family did not respond to queries on the issue. An online memorial- https://www.forevermissed.com › thogori-karago -has been opened to celebrate her life.

“It is a place to celebrate her life by sharing fond memories, photos, music and more.” 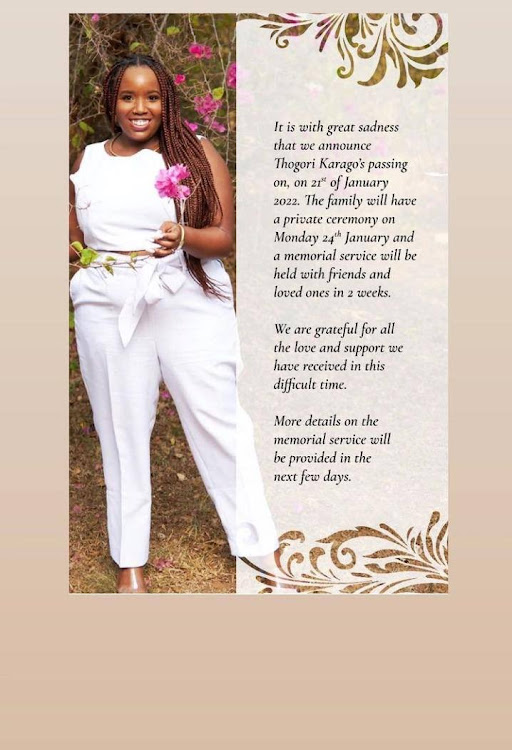 According to her website www.thogorikarago.com, she is the founder of SpeakEasy, a content creator accelerator and marketplace focused on amplifying the voices of women and children creators.

“She is a highly sought after start-up angel investor, advisor, senior software engineer, and product manager and currently sits on the advisory board of 6 start-ups led by minority founders.”

Karago was a former Senior Software Engineer & Product Manager at LinkedIn and the Head of Research and Development for the African continent.

Karago was responsible for overseeing LinkedIn’s growth on the African continent with the vision to create economic opportunities for every member of the African workforce.

Before this, Karago led the monetization team on subscriptions products at LinkedIn, where her team worked on connecting job seekers with the knowledge and skills they need to succeed in today’s hiring marketplace.

“He was a quiet man and he lived alone after separating with his wife and we only came to know of his death after police confirmed his identity ...
Lifestyle
7 months ago

A family in Embu Town is crying for justice following the mysterious death of their kin who was a renowned master of ceremonies (MC).
Crime
8 months ago