Do you know this woman? KOT search for grieving mum 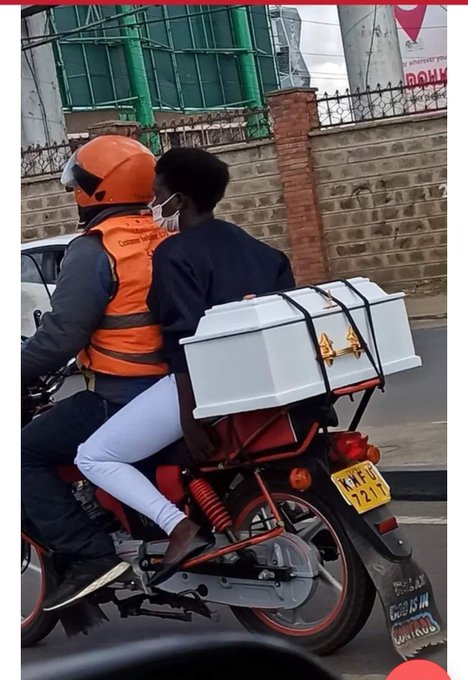 A photos of a woman believed to be a grieving mother ferrying a child-sized coffin in a bvodaboda has touched many Kenyans on Twitter.

A tweep by the name @Just_Wanjiru posted the photo asking KOT to help her trace her so they can help her.

KOT this photo is pricking my heart,Kindly help me locate this mum .Kindly ....💔💔😢

Another KOT member also posted an anonymous story of a woman who also buried her three-year-old son.

She narrated, "My 3-year-old baby passed away on the 14th of December. We decided to bury him on the 18th. On the 17th of December, I got a call that my man got arrested and the person hung up before I could ask for more information. We buried my child without him.

He came in on the 19th and told me it was a wrongful arrest. I took him to our child's grave and we cried together. He told me he was going away on business for a few days.

A day after he left I got a call from his ex that on the day we buried my child my man was getting married. The business trip he told me about was actually his honeymoon. He married the girl I once asked him about and he told me she was his distant cousin.

I sent him a long text telling him I know about his secret and that I was deeply hurt. He blue ticked me. What kind of a father misses his son's burial? Why do men do this to us?

The pain I'm feeling right now is deeper. I have been with him since 2016 and he married someone he met in June."

Here are some reactions from KOT.

@brendamaina: I know a family who wrapped their dead baby in baby wrappers and the mum carried him all the way to Western because they could not afford to hire a hearse.

@eyevonnita: Reminds me of how my mum died before my eyes in 2019 June and I had to take her to the morgue by myself. May that lady find heavenly peace.

@opinya: My wife once gave birth to twins prematurely at 25 weeks and non survived, I used cartons to carry the babies to the cemetery for burial. She has never recovered from this.

@DanKipkorir:  I once brought my brother's dead newborn in a box. I left the mother in the hospital. I have never recovered.

@Maxyzacks: Laid mine to rest today after he was born on 6th and passed away after two days. Sad times.

@BenjiNdolo: The indignities in this country are beyond words, how does one ever heal? Craziest part is how many normalize suffering and think it’s ok. You’ll hear them saying, she doesn’t have a car.. sasa angefanya?

The father, Judah Bett, revealed, "It is very hard to explain the pain we have as parents on both sides, a child is a gift from God a gift that is so ...
Lifestyle
9 months ago

Marya Prudence has pointed out that most times, family and friends forget that the man is also grieving the loss of a child.
Entertainment
9 months ago