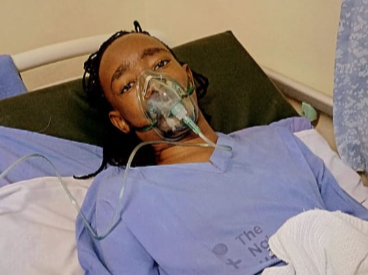 The comedian fraternity in Kenya has bundled together to raise funds for the ailing Churchill Show star Akuku Danger.

Akuku is hospitalised and getting treatment for a lifelong illness he has had.

Speaking during New Year's Eve show held at Garden City, the godfather of comedy Churchill dedicated the show to Akuku Danger saying, "Akuku Danger was born with Sickle Cell Anemia and that means he is always in and out of the hospital. Being able to come here and entertain you is what has kept him going. Imagine being told you have a year to live.

Do you know how depressing that is? But he keeps going. The thing with the disease is that when it hits, it hits very hard. We have dedicated this show to Akuku Danger and part of the proceeds from the show will be used to clear his hospital bill."

Actress Sandra Dacha who first broke the news of Akuku's hospitalisation, informed fans, "He has finally opened his eyes and the first thing he asked for was a pen and paper and he wrote 'I want to go home'."

So, what is sickle cell anaemia? This is a disorder that causes red blood cells to become misshapen and break down.

Treatments include medication, blood transfusions and rarely a bone-marrow transplant.

We wish Akuku a quick recovery.