Mimi ni mjanja! My son is a US citizen - Pastor Ng'anga 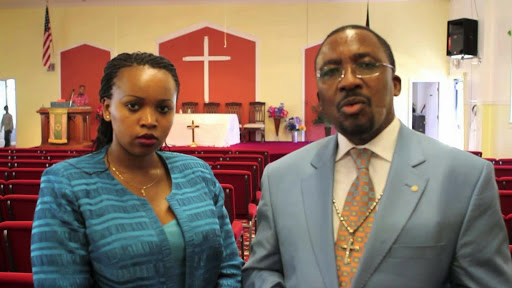 Neno Evangelism founder Pastor James Ng'ang'a has revealed that his first born son was born in the USA.

The preacher is on a USA tour.

Introducing himself in one of his tour speeches in the USA.

"I'm James Maina, not learned. The little I know is used to spread the gospel. I have a TV station called Sasa TV and I'm a crazy preacher as in matata, like it or not."

Pastor Ng'ang'a narrated how he was in prison and did not get a chance to pursue further education.

Adding, "It doesn't matter what people are saying about you, you talk about yourself. I'm a rich preacher, I have cars and hotels..."

Last night he was in Washington where he bragged about his firstborn son with his second wife - his first wife passed away - was birthed in the USA making him an automatic citizen.

"There is a year I came to America like six times, I was so jaded because of the nasty jetlag. At the time my wife was very young, I do have a young wife, so in one of the trips, at the time she was pregnant, she came and gave birth here."

He bragged, "I'm smart. it is only that I did not get an education. Mimi ni mjanjaree. She gave birth to our son in Carolina, now I have an American child, so when we go to get our visa's he line up in the mzungu lane and us the other lane."

Not only congregants who should recognize the commander but also the demons.
Entertainment
2 months ago

'I can't pray for you...' TB Joshua's last words to Pastor Nganga

Pastor Nganga said, "When I went, TB Joshua gave me his presidential suite, a very big place. He told his people, 'Take this prophet there'."
Exclusives
5 months ago