• When people age they are more likely to experience several conditions at the same time, 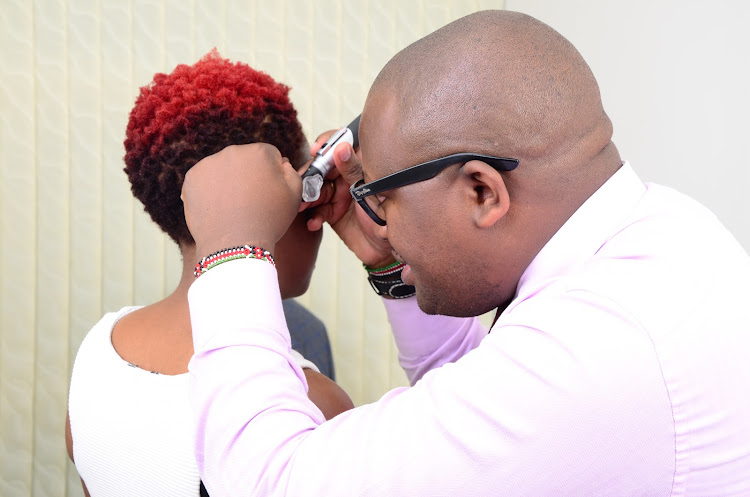 A consultant audiologist at IncusEar Hearing and ENT Centre, attends to a patient
Image: MAGDALINE SAYA

According to the World Health Organization, some of the diseases that come up with old age include; hearing loss, cataracts and refractive errors, back and neck pain and osteoarthritis, chronic obstructive pulmonary disease, diabetes, depression and dementia.

WHO also states that when people age they are more likely to experience several conditions at the same time, older age is also characterized by the emergence of several complex health states commonly called geriatric syndromes.

According to the National Institute on Deafness and other communication disorders;It is one of the most common conditions affecting elderly people.It is also referred to as Presbycusis.It occurs gradually as grows olderAge related hearing loss most often occurs in both ears, affecting them equally. Because the loss is gradual, if you have age-related hearing loss you may not realize that you’ve lost some of your ability to hear. Hearing loss arises mostly from changes in the inner ear as we age.

This is a condition that affects the vision of a person.

According to prevent blindness.org, Presbyopia is a condition that tends to occur with ageing usually age 40 and older – where a person is unable to see objects clearly up close.

This occurs when the lens of the eye hardens with aging and is no longer able to focus clearly for near objects. Reading glasses can help to read and view near objects.Back and neck pain and osteoarthritis.

According to the National Institute of Arthritis and Musculoskeletal and skin disease, Osteoarthritis is a joint disease that happens when the tissues in the joint breakdown over time.

People with this condition usually have joint pain and after rest stiffness ( inability to move early) for a short period of time.

The most commonly affected joints include the hands (ends of the fingers and at the base of the thumbs), knees, hips,neck and lower back.

According to the World Health Organization, dementia is a syndrome that reduces a persons ability to process thought beyond what might be expected from the usual consequence of biological aging.

Dementia signs and symptoms occur in three different stages according to the world health organization where the third stage is the most intense.

In the last stage one becomes unaware of the time and place, has difficulty in recognizing relatives and friends, has an increased need for assisted self care , has difficulty in walking and experiencing behavior changes that may escalate and include aggression.