Dead or Alive? Man in the streets of Nairobi searching for his father

• "He met my mom circa 1995, they dated and that's how I was conceived. Immediately after, he was called to join the Kenyan Army in a peacekeeping mission in Sierra Leone." - Benson 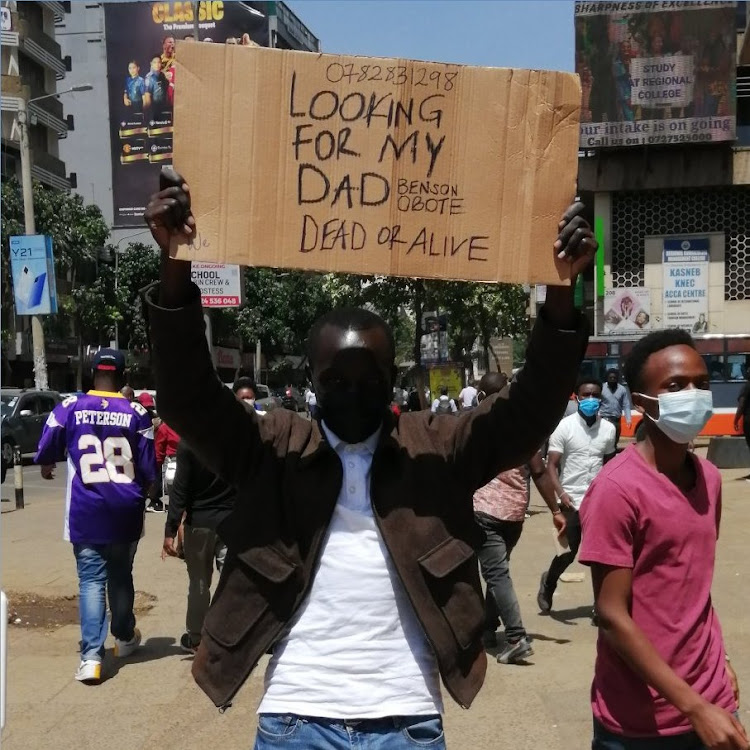 A man named Benson Kirobi took to the streets of Nairobi CBD to search for his father.

He carried a placard written,

"I am looking for my dad Benson Obote, dead or alive."

In a social media post, the man explained that he was not pulling a stunt, but rather seeking to unite with his father.

"He's in the Kenyan army and has no idea I exist."

Benson further explained how his mother lost track of his father.

"Reason I dont know my Real father is: He met my mom circa 1995, they dated and that's how I was conceived. Immediately after, he was called to join the Kenyan Army in a peacekeeping mission in Sierra Leone. So he left!" he said.

According to Benson, the mother concluded that his father died in the army, hence got married to another man.

"My mother settled down with another man. In the late 90s and early 2000s,she asked around about my biological dad's whereabouts.Did he make it back home from Sierra Leone? She was told that most of the Kenyan soldiers were KIA.She concluded tht he was one of the fallen soldiers," he said.

Benson says he knew that the man married to his mum is not his biological dad after 25 years.

"Recently, through a reliable source who my mother had confided in about the Truth of my Real Father, I came to discover that my Biological dad was not KIA, and that he made it back home to Kenya after the Sierra Leone mission."

The man now yearns to reconnect with his biological dad whose whereabouts are not known.

Principal Magistrate Ben Mararo said Anwar should be arrested if he is not admitted in the hospital as alleged.
Politics
1 month ago