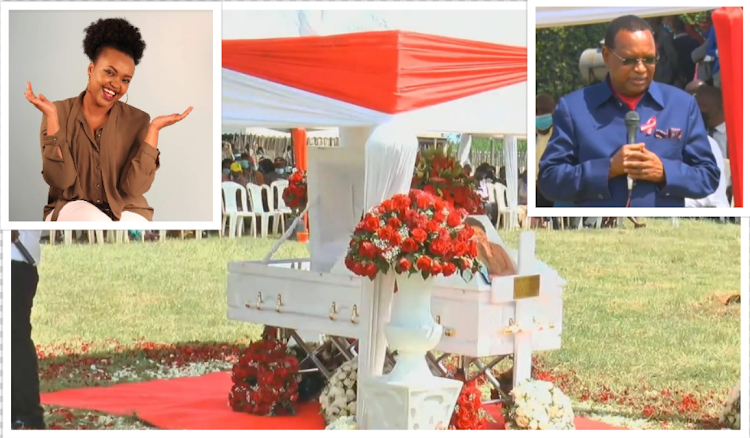 The late Janet Bett - Karoney with her dad, Judah Bett

The parents of Janet Bett - Karoney paid a moving tribute at her funeral service yesterday at Moiben, Uasin Gishu County.

Her mother, Rael Bett's recorded tribute was played at the funeral.

She said, "As a mother of Janet, I feel so blessed to have been able to nature Janet and see her grow to be a wonderful lady, She was full of life, love and laughter. I lack the words to explain the loss, her place cannot be replaced by anybody, we love her so much, we say Kwaheri Janet and thank you for being our daughter."

The father, Judah Bett, revealed that she is grieving and yet to internalize the loss so she recorded her tribute for Janet.

"It is very hard to explain the pain we have as parents on both sides, a child is a gift from God a gift that is so precious that when you lose them part of you is lost. I pray that God will continue to accept and comfort us."

He went ahead to narrate a time when Janet was 4 years old and survived a drowning.

"While having lunch by the swimming pool at the Karen Country Club, which we used to go to every day after church, Janet was learning how to swim, she followed the sisters and went to the deep end.

We heard a child is drowning, when she was taken out of the water we realised it was Janet. Thank God there was a doctor there and he gave her first aid before we went to the hospital."

Judah continued, "From last year, I have been writing personal messages on each and every birthday of our children.

We have a family WhatsApp group and we used to write, happy birthday Janet ...so and so and put a few emoji's of cake and ice cream and balloons but this year, I sent a message to Janet on her birthday on June 14, 2021.

At the end of the day, the rest of the family were saying, you have not posted a message on the group for Janet. My answer was, I sent a special direct message to Janet ."

Photos of Nyashinski's sister in law's coffin arriving in a plane

Janet Bett wrote, "My husband is truly the perfect husband. He stood with me till the end. I have no doubt whatsoever that Nemye is in great hands ...
Entertainment
6 months ago