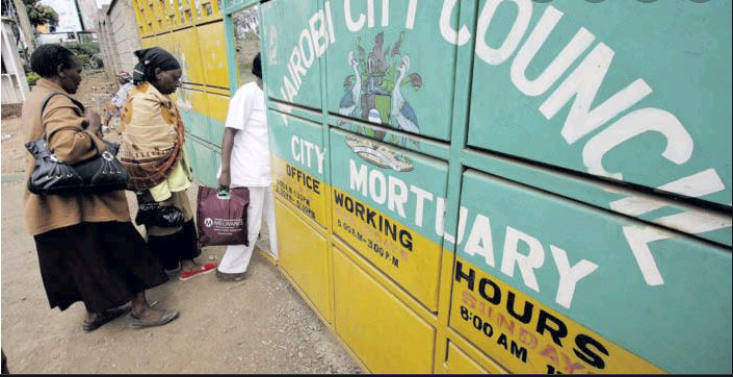 The City Mortuary has 164 unclaimed bodies lying in its establishment and they are planning to dispose of them.

Nairobi county's metropolitan services has announced that the bodies will be buried in a mass grave.

In a public notice, they advised, "Interested member of the public to identify and collect the below-named bodies within 7 days, failure to which the Nairobi Metropolitan Services will seek authority for disposal."

The mortuary is almost overflowing as its capacity allows for 176 bodies.

Some of the bodies were identified by their official government names but they are still unclaimed, while others are Jane and John Doe's who died due to weird reasons like electrocution, murder, shooting - by thugs or cops 0r from accidents.

Among the unclaimed bodies were also victims of mob justice, arson/ fire and drowning.

The mortuary also took in bodies of people who suddenly fell in and died and those who died of natural causes.

There were also several babies and foetuses at the city mortuary due to illegal abortion.

These unclaimed bodies were collected between  March and May 2021, while 49 were from the last two months of 2020.

According to the Public Health Act Cap 242 of the, an unclaimed body should be removed from a mortuary within two weeks or else it is disposed of in a mass grave after public officers obtain a court’s permission.

Last month, it was revealed that negligence by police and unwilling family members have been faulted for the high number of unclaimed bodies at the City Mortuary.

Police were accused of failing to follow up and bring in reports of the deceased to the morgue after the bodies are admitted.

Bizarre murder of smartly dressed man with wire around neck

It’s suspected that the man was murdered through strangulation before the body was dumped near Delamere farm on the wee hours of Wednesday morning.
Crime
1 year ago