• Candido has buried more than 3,000 people in his three-decade gravedigging career. 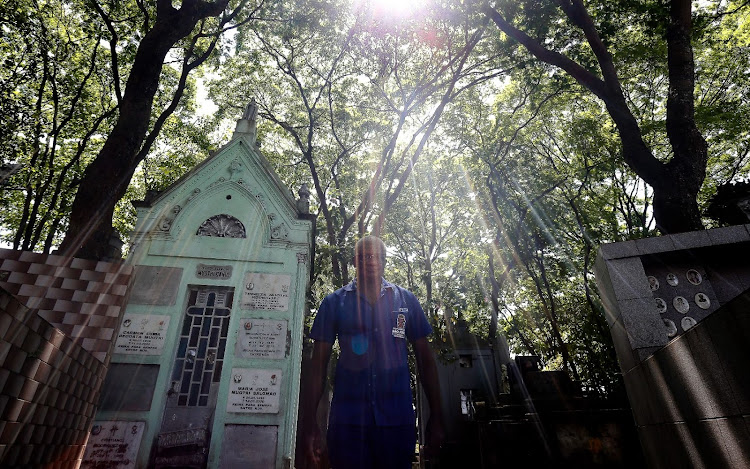 Osmair Camargo Candido, 60, known as Fininho, poses at a cemetery where he works as a gravedigger, in Sao Paulo, Brazil, on September 28, 2021. Fininho, who has worked for over 30 years as a gravedigger, is a philosophy teacher, gives vocational courses at a school, and is writing a book.
Image: Miguel SCHINCARIOL / AFP

For Osmair Candido, who has worked as a gravedigger for the past 30 years, the pandemic was worse than a nightmare, an ordeal the Brazilian overcame only with the help of a few old friends -- Kierkegaard, Kant and Nietzsche.

The soft-spoken 60-something -- whose occupation necessitates spending most of the day in a small cemetery in Sao Paulo -- is not just a labourer but also a man of letters, a philosopher.

During the pandemic he says he sometimes cried, overwhelmed by the rampant death, but adds that philosophy kept him from fainting with distress and fatigue like his colleagues near the graves he was digging.

"Before we only had one burial a week," but at the worst of the pandemic "it was up to 18 a day," he tells AFP, comparing the scene to something from Dante.

With the help of the philosophers Heidegger, Kierkegaard, Kant, Hegel and Diderot, he was able to "accept death."

But above all it was the works of Nietzsche and the ancient Greeks that helped him "a lot in the most difficult moments."

When Candido left his house each morning, he did not know whether he would return from the Penha Cemetery "alive or dead, contaminated or not."

Each evening he took "one, two, three or four showers."

Six months ago, "the hearses were arriving back-to-back and there were 100 to 200 coffins piled up waiting to be buried.

"Nobody wanted to touch them, to take the risk," says Candido, who adds that he never caught Covid-19.

The worst was the burial of a teenager: "From behind a wall, I heard a woman scream. The scream came before her son's body." She then clutched his coffin, preventing his burial. 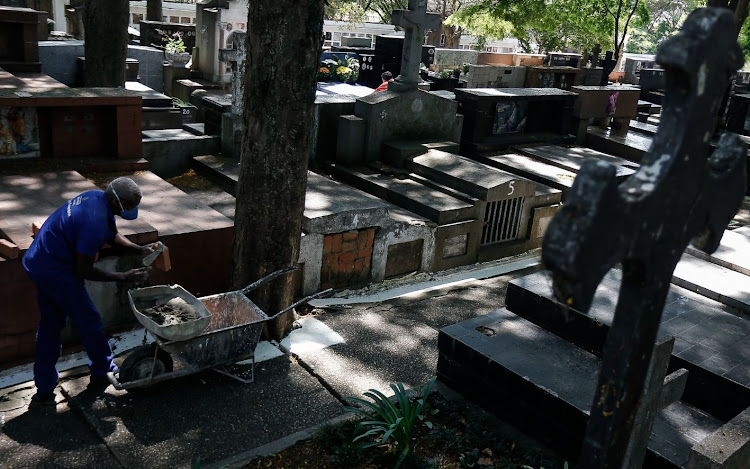 Osmair Camargo Candido, 60, known as Fininho, works as a gravedigger at a cemetery in Sao Paulo, Brazil, on September 28, 2021. Fininho, who has worked for over 30 years as a gravedigger, is a philosophy teacher, gives vocational courses at a school, and is writing a book.
Image: Photo by Miguel SCHINCARIOL / AFP

Candido has buried more than 3,000 people in his three-decade gravedigging career.

"During all of these years, I have seen very few people prepared for death. Death requires a lot of respect, attention and silence," he says.

Wandering among the graves in the wooded cemetery, Candido recounts how he came to philosophy.

It all began, he says, when he took German classes at Uniban university in Sao Paulo, after being a boxer and window washer.

"I loved literature, but I couldn't buy books," he recalls. "So they gave me some. And then I decided to study philosophy. I really liked it."

Thanks to a scholarship he was finally able to graduate with a master's degree from Mackenzie Presbyterian University in Sao Paulo, during which time he communicated via email with French philosopher Jean Baudrillard.

If he is now able to stare death in the face, it is only because he is already living a second life -- Candido is now also a philosophy teacher.

In the evening, wearing a white lab coat emblazoned with the National Association of Necropsy emblem, Candido teaches ethics to young autopsy technicians.

They take notes as the slender Black man, who has white hair and rimmed glasses, quotes from Aristotle and the likes.

Candido, who usually gets up at 3:00 am, is also currently finishing a three-volume book on philosophical thoughts, two of which are devoted to the pandemic. Several publishing houses have said they want to publish it.

"Philosophy has made me grow up, get out of myself, understand and consider others and other ideas. It was a big step," Candido says.

While he "adores" Emmanuel Kant, the gravedigger had a bit of trouble with his "Critique of Pure Reason."

"I read it up to 100 times, until I understood it! In Portuguese, but some parts in German," he says.

Candido believes that it was thanks to the philosophers that he did not have to go to "psychiatric hospitals for treatment" as his fellow cemetery workers did.

Man found dead in a woman's house under the bed

The body of the deceased is now lying at Narok County Referral Hospital mortuary pending postmortem and further investigations into the incident.
Crime
1 week ago