Piece by: KNA by Florence Kinyua 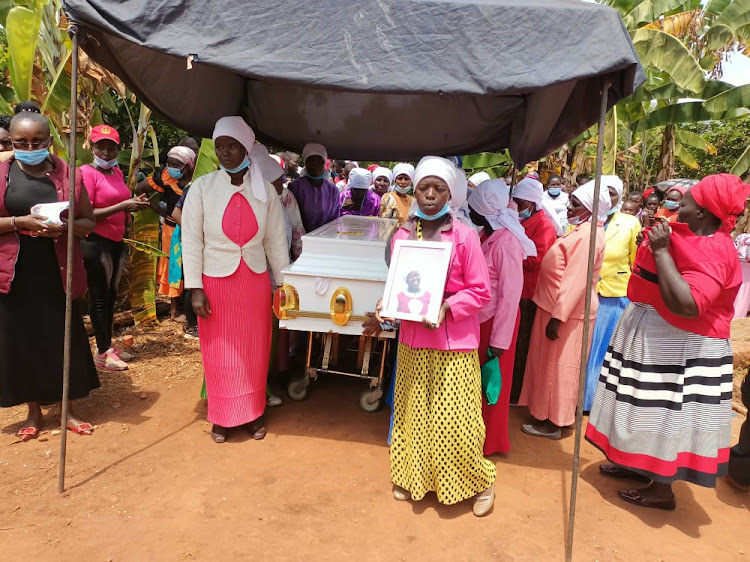 Mourners and family members escort Stella Njeri to the grave. Njeri died after she flatly refused to accept medical attention at Maragua Sub-County Hospital saying it was against her religious conviction.
Image: FLORENCE KINYUA

Kirathini village Gatanga, Murang’a County was thrown into mourning and agitation on Tuesday during the burial of a 30-year-old woman who passed on due to birth-related complications after she flatly refused to be attended to in hospital.

In a bizarre case of faith versus modern maternal interventions, the deceased Stella Njeri Kinyanjui and her husband defied all advice to have her admitted to hospital to save her life and that of her unborn child.

Addressing the mourners during the burial, Ms Cicilia Mahinda the health officer Gatanga narrated how she was informed of the deceased’s situation and immediately set out to rescue her.

“We went to her home and found her in labour and after a serious altercation with her husband Kinyanjui, we took the deceased to Maragua Sub county hospital,” she recalled.

The officer noted that had she been under the hospital’s care such a loss could have been averted.

Sadly upon arrival at the hospital, the duo adamantly declined to be attended and even signed the required forms absolving the hospital from blame and left for home where Stella died upon arrival.

Angry mob that was baying for the blood of the family members was restrained by the local authority.

At the same time, Murang’a County Minister for health Mr Joseph Mbai termed that act of faith as pure backwardness and ignorance and sent a strong warning to the kanitha wa Ngai sect members and others who prefer praying for the sick at home instead of seeking medical interventions in hospitals.

“As a government, we do not have a problem with your faith but if someone falls sick, we are responsible,” stated the agitated Mbai.

He added that if the deceased who was expecting her first child had heeded the medics advice, her life and that of her child would have been saved through a caesarean section.

Kirathini residents divulged that it was not the first time a member of the said faith had died after refusing to seek medical attention.

“The leader of the sect died together with his wife and children a while ago when they chose to pray and not go to the hospital,” noted one of the residents adding that it is ironical they refuse to go to hospital but when one dies he/she is taken to a mortuary in the same hospital.

However the members of the kanitha wa Ngai sect appeared unperturbed by the events and did not want to address the media as they claimed to have gladly accepted what had befallen Stella as the ‘will of God’.

Instead, they chose to dance by the graveside and ‘celebrate her victory over death as they bid her goodbye.

Details of gruesome murder of grandpa at 3am

Two vehicles, one belonging to the victim’s sister and a motorcycle were burnt to a shell during the 3 pm incident according to a police report.
Crime
1 week ago