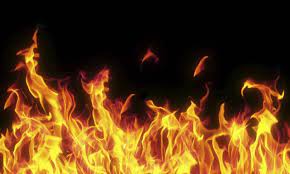 A family in Ndugamano village in Kigumo has been left homeless and in agony after their house caught fire on Sunday night.

The family of eight narrowly escaped death and are recuperating at Murang’a level 5 hospital and Maragua sub-county hospital.

Speaking to the media from his hospital bed, Humphrey Maina, said he suspects that the fire started as a result of a gas leakage in their house and it spread too quickly, they could not salvage anything.

“I sustained severe burns on my body as I tried to rescue my children and my nephews who were trapped inside the burning house,” stated Maina.

The family members were rushed to Murang’a level 5 hospital and Maragua sub-county hospitals for treatment after they were rescued from the raging fire.

Pauline Mukami and Pius Kiiru’s two children, who were at their uncle’s house that fateful night, were rescued from the inferno and were rushed to Murang’a level 5 hospital where they are receiving treatment and recuperating.

Maina, his wife and two children together with their house manager Mercy Njoki are recuperating in Maragua sub-county hospital.

According to the doctors attending to the family at the two facilities, the eight family members who suffered various degrees of burns on different parts of their bodies are all in stable condition.

“We received eight family members with various degrees of burns, they are currently receiving treatment at our facilities and all of them are out of danger,” one of the doctors stated.

Meanwhile the two families are now appealing for help from local leaders and well-wishers even as they continue receiving treatment so that they can get back on their feet.

Mary Hongo died after she developed breathing difficulties and collapsed.
Entertainment
1 year ago