What life is like aboard Elon Musk's SpaceX capsule? (Photos) 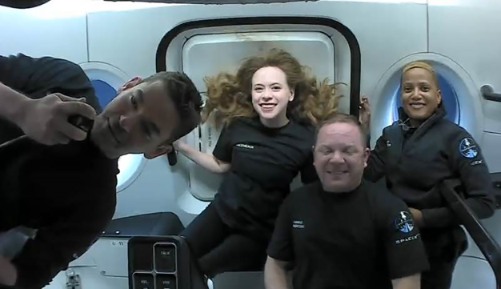 In this file photo taken on September 16, 2021 courtesy of Inspiration4 shows the Inspiration4 crew (L-R) Jared Isaacman, Hayley Arceneaux, Christopher Sembroski and Sian Proctor in orbit. The four private space tourists aboard a SpaceX capsule return to Earth on September 18, 2021, touching down off the coast of Florida after three days of orbiting the planet.
Image: Handout / Inspiration4 / AFP

The first space tourism mission by Elon Musk's SpaceX blasted off from Florida on Wednesday and the four crew members -- a billionaire and three other Americans -- have already seen more than 25 sunsets and sunrises.

SpaceX has released few details about their adventure since they reached an orbit which is more distant than that of the International Space Station.

Here's what we know about their life on board:

The four space tourists are aboard the SpaceX crew capsule called Dragon.

The capsule is composed of a trunk, which is inaccessible to the crew, upon which sits the living quarters.

The entire volume of the capsule is just 9.3 square meters (328 square feet).

Chris Sembroski, a 42-year-old Air Force veteran who is one of the crew members, has compared it to travelling with friends in a van -- one you can't step away from though if you want to take a break. 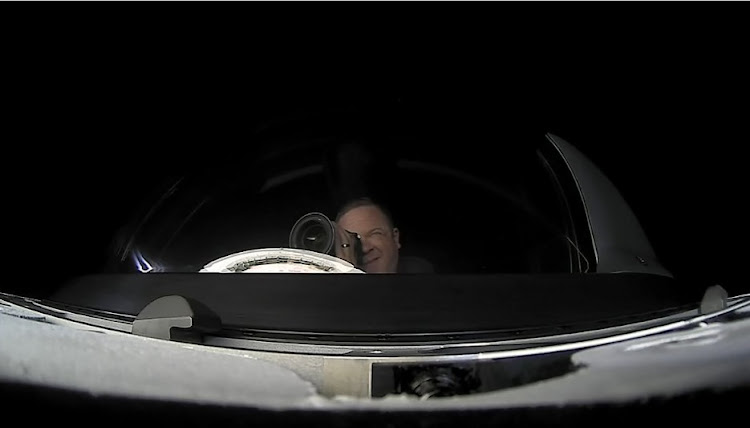 This September 16, 2021, image courtesy of Inspiration4 shows the Inspiration4 crew member Christopher Sembroski taking photos out of an observation window while in orbit. SpaceX's all-civilian Inspiration4 crew spent their first day in orbit conducting scientific research and talking to children at a pediatric cancer hospital, after blasting off on their pioneering mission from Cape Canaveral the night before.
Image: Handout / Inspiration4 / AFP

The exact technology behind the toilets aboard the capsule is a SpaceX secret.

But Hayley Arceneaux, one of the four crew members, said in a Netflix documentary that the "bathroom is on the ceiling."

"Really literally a panel that we take off and there's like a funnel," Arceneaux said. "There's no upside down in space."

The toilet is located near the clear glass observation dome, or cupola, installed on Dragon, which provides a spectacular 360-degree view of the cosmos.

"When people do inevitably have to use the bathroom, they're going to have one hell of a view," billionaire Jared Isaacman, the mission commander, told Business Insider. 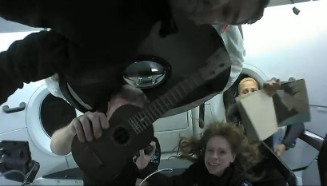 This screengrab taken from the SpaceX live webcast on September 17, 2021 shows Inspiration4 crew members (from L) Jared Isaacman, Christopher Sembroski holding up a ukelele, Hayley Arceneaux and Sian Proctor holding up her artwork while in orbit. The first space tourism mission by Elon Musk's SpaceX blasted off from Florida on September 15 and the four crew members -- a billionaire and three other Americans -- have already seen more than 25 sunsets and sunrises.
Image: Handout / SPACEX / AFP

The 29-year-old Arceneaux, who was treated for bone cancer as a child at St. Jude and works there now as a physician assistant, was asked by a patient what the astronauts do for "fun" in space.

She said they have spent time "eating, doing chores and looking out the window at the world."

The astronauts were also asked what is their favorite "space food."

"My favorite space food is pizza which I had yesterday and I'll probably have for dinner tonight also," said Sian Proctor, 51, who teaches geology at a small college in Arizona and was a finalist to become a NASA astronaut.

Musical interludes are also planned. Each passenger drew up a 10-song playlist and Sembroski planned to bring his ukelele.

The instrument and other objects are to be auctioned later with the proceeds going to St Jude.

The goal of the mission is to raise $200 million for the hospital, with Isaacman personally donating $100 million. 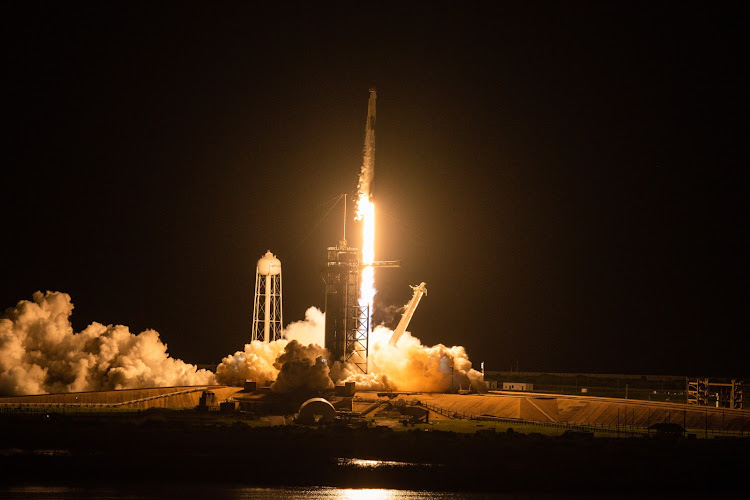 The SpaceX Falcon 9 rocket carrying the Inspiration4 crew launches from Pad 39A at NASA's Kennedy Space Center in Cape Canaveral, Florida on September 15, 2021. The Inspiration4 mission, the first to send an all-civilian crew to orbit, will venture deeper into space than the International Space Station.
Image: CHANDAN KHANNA / AFP

SpaceX tweeted on Thursday that the crew had carried out a "first round of scientific research."

One of the goals of the mission is to collect data on the effects of the environment of space on complete novices.

Their cardiac rhythms, sleep and blood oxygen levels will be monitored along with radiation exposure.

Their cognitive functions were tested before the flight and will be examined again on their return.

Hacked! How celebrity password fails exposed them
Exclusives
9 months ago