• It was established that the three were on a land-buying mission in the area and had toured a piece of land that Sidik intended to buy before they were attacked by a machete-wielding mob that butchered them to death. 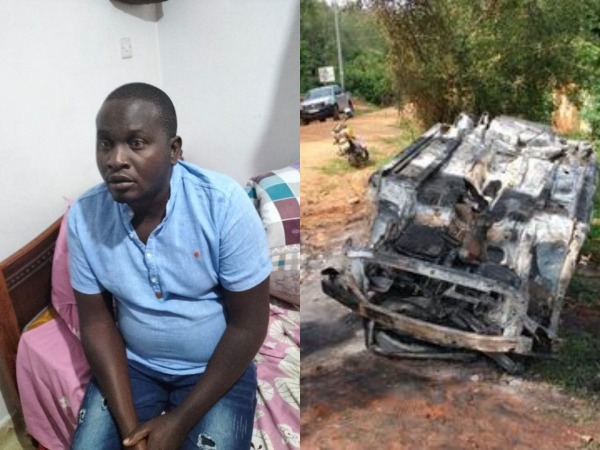 Robert Mganga, the prime suspect behind the gruesome murders of three men in Kilifi's Junju B village has been arrested.

The murders occurred on July, 7 this year.

Robert Mganga who went into hiding immediately after the incident was flushed out of his hideout at Ambuja Court, in Tassia’s Fedha Estate.

Mganga, is believed to have masterminded the attack on Kilifi businessman and farmer Sidik Anverali Mohammed Sidik, 46, James Kazungu Kafani, a land agent who was in his late fifties and another unidentified man of Indian origin believed to be Sidik’s driver before setting ablaze their vehicle, a white Toyota Fielder.

“The man came to the house pretending he wanted to talk to her only to whip out a knife and slash her on the stomach leaving her intestines hanging ...
Crime
1 week ago

In a sting operation mounted by Special Service Unit (SSU) detectives, Mganga was finally cornered yesterday at around 10:30 am.

He had previously escaped a police dragnet prompting the DCI to unleash the elite Special Service Unit for his manhunt.

The cold-blooded murders of the three had left more questions than answers in the minds of their kin, with some of Kazungu’s family members alleging that their kin was murdered by people well known to him.

It was established that the three were on a land-buying mission in the area and had toured a piece of land that Sidik intended to buy before they were attacked by a machete-wielding mob that butchered them to death.

According to eyewitnesses, Kazungu had pleaded with the attackers in their local Giriama dialect begging them to spare their lives, but the assailants who were determined to eliminate them would hear none of his pleas.

"His tongue was bitten, his eyes swollen and his face looked distressed. His neck is tightly gripped by the rope. I looked at my little brother's ...
Lifestyle
5 days ago

The lifeless bodies of the three that had deep cuts on the heads appeared to have been dragged on the ground for a distance before they were left sprawled by the roadside near Junju secondary school.

The horrifying scene was processed by Crime Scene detectives immediately after the murder, with the forensic evidence gathered and analyzed at DCI’s forensic lab pointing at Mganga as the key suspect.

Following his arrest yesterday, Mganga will assist detectives in unravelling the murder mystery and revealing the rest of his accomplices to face justice.

The Directorate of Criminal Investigations reassured the families of the deceased that no stone shall be left unturned in the investigation of the murders.