• "Look, its just a traditional wedding that doesn't count as a wedding wedding." -Pleaded the guy 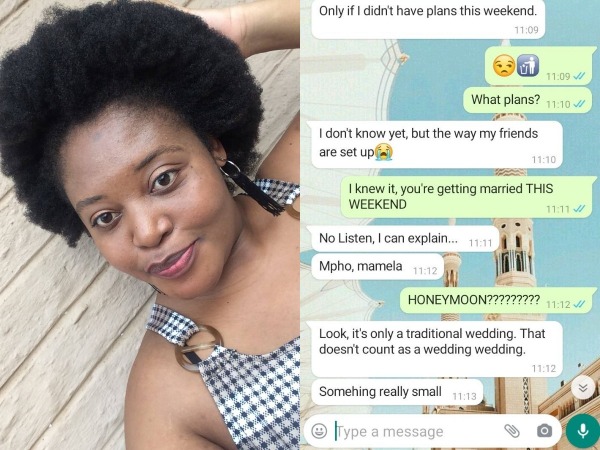 A woman identified as @MphoMoalamedi on Twitter has shared a screenshot of a guy asking her out on a date the same day he had his traditional marriage.

The man in question explains that traditional marriage is not such a big thing, pleading with Mpho to accept his request.

'If only I did not have plans this weekend.' The man texted

The woman responded by asking what plans he had for her?

He responded by saying he is not sure adding that his friends might have something lined up.

The man identified as Evans Nyaga allegedly got into the house through a back door, he then proceeded to put off the lights at the main switch before ...
Lifestyle
1 month ago

The lady then decided to expose the man's lies by letting him know she knew he had a traditional wedding planned for that weekend.

'I knew it, you are getting married this weekend.'

Seeing that he had been found out, the man defended himself by arguing that a traditional wedding isn't a real wedding.

"Look, it's just a traditional wedding that doesn't count as a wedding.'