Mourning for who? Why dancing during funerals is the new norm

•In the past, it was considered almost taboo to twerk at a gravesite but that is now a thing of the past. 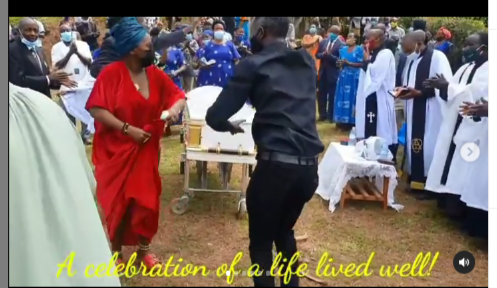 Dancing around the gravesite after laying a loved one to rest seems to be the newest way to say goodbye.

Back in the day, such things were unheard of but the millennials and generation Xers has proven that the word impossible does not exist in their dictionary.

Over the weekend, a video of young people dancing around a gravesite has gone viral mainly for two reasons.

Never settle for an ordinary lover - Lilian Muli's letter to herself

Lilian Muli could be writing this letter from her personal experience.
Entertainment
1 month ago

In the past, it was considered almost taboo to twerk at a gravesite but that is now a thing of the past.

Funerals have also revolutionized in the sense that people no longer wear black and white as it has always been the custom.

The dancing trend was also noted during the burial of Anne Kansiime's mother.

The family caught many by surprise after they were caught singing around the coffin.

Many had thought they would be engulfed with sorrow instead they chose to celebrate a life well-lived.

'I will miss you,' Akothee and sons cry when Nelly Oaks leaves (photos)

Akothee's sons got so close to Oaks that Oyoo even insisted on sleeping on her mother's bed where Nelly Oaks was sleeping too.
Entertainment
1 month ago

Do you think it's OK to dance around the grave especially to secular songs such as Wamlambez?