Man whose teeth were uprooted by kanjo undergoes surgery

•Maina was attacked on July 2 after he failed to raise a bribe of Sh100 allegedly demanded by the officers as he only had Sh20. 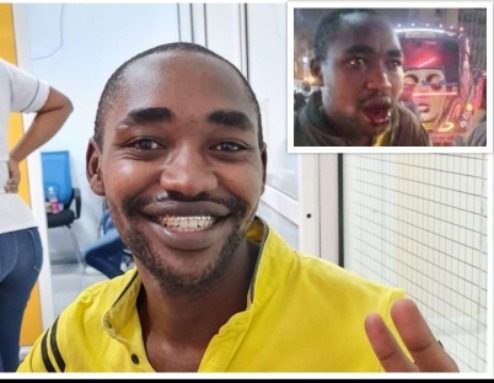 Nairobi hawker Anthony Maina whose teeth had been uprooted by city askaris' alias kanjo has successfully undergone surgery and had his teeth replaced.

Maina was attacked on July 2 after he failed to raise a bribe of Sh100 allegedly demanded by the officers as he only had Sh20.

He lost five teeth and suffered a broken jaw after he was hit with a metal rod while handcuffed by city inspectorate officers.

Dr. Kennedy Carson Opiyo from Kenya Orthodontics said Mr. Maina is on his way to recovery after successful surgery to fix a broken jaw and teeth.

“The X-ray showed the young man had a broken jaw, some loose teeth, and a deranged bite.

The two broken points were at the back and the front meaning the lower jaw was hanging loosely,”

We decided to help so we did it for free. Maina is recovering at the moment and is due for a review in two weeks." Said Opiyo.

Maina was recently awarded Sh427,200 as compensation for the abuse he suffered at the hands of the city council askaris.

The 37-year old officer, a private at Gilgil KDF Camp died in his house at Kahawa Wendani in Kiambu Ruiru sub-county, when his wife’s jaws cast her ...
Entertainment
1 month ago