Quiver's club shooter opens up on what happened

• The man is a businessman in real estate and licensed to carry a gun.  He had apparently come with the woman caught in the shooting drama. 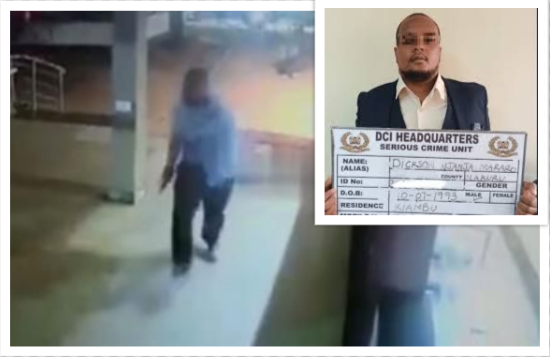 CCTV freez frame from the Quiver Lounge and Grill shooting

A man who was captured on camera shooting at a crowd and injured two police officers and a civilian surrendered to police and is expected to face attempted murder charges.

Dickson Mararo surrendered yesterday to police at the Directorate of Criminal Investigations headquarters, Nairobi in the company of his lawyer Cliff Ombeta.

He said he feared police would kill him and hence went into hiding since Friday, July 2 night when the shooting happened at Quiver Lounge and Grill along Thika Road, Nairobi.

He told police he was provoked by the officers at the scene of the shooting, prompting the drama.

Ombeta said his client acted in self-defence and that the drama had started from far following an argument and disagreement. After he surrendered he was taken in by the head of Serious Crime Unit Obadiah Kuria who recorded his statement and later ordered his detention.

The man is a businessman in real estate and licensed to carry a gun.  He had apparently come with the woman caught in the shooting drama.

He shot two police constables and a female civilian before he escaped from the scene.

One of the officers was injured in the hand, the other in the neck while the woman was hit in the stomach.

One police officer and the woman are admitted to the hospital in serious but stable condition.

The revellers were attending a party for a senior police officer and were concluding the events when the gunman walked there and approached a group that was talking.

A city man based in Kayole has taken the law into his own hands and repossessed dreadlocks belonging to his girlfriend from a man who had not paid ...
Exclusives
11 months ago