• Witnesses said neighbours who responded, the officer threatened them with a gun before taking off, soon after they rushed to see what had caused the loud bang. 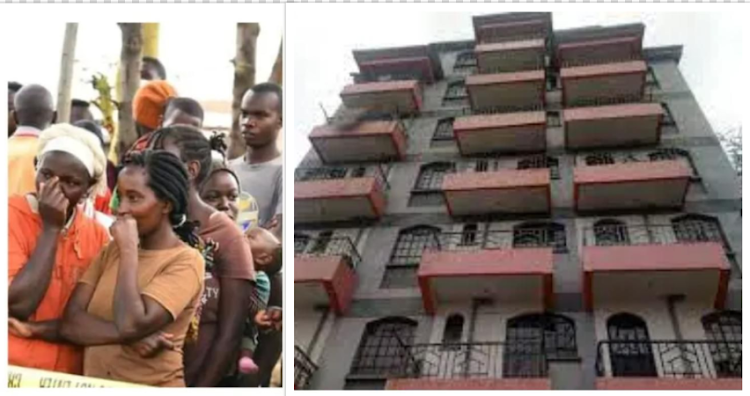 Scene of the crime

A police officer was Sunday arrested after he allegedly pushed his fiancé over the balcony of an apartment they have been living in.

He surrendered on Sunday night after being on the run for two days. Police said he was escorted to the Kasarani police station by his colleagues who knew he was wanted.

He denied he pushed the woman and argued she jumped off in rage.

The incident took place on July 3, attracting a huge crowd at the scene. Witnesses said the middle aged woman identified as Jackline Muthoni died after she fell on the rear windscreen of a salon car that had been parked outside.

She fell from the fourth floor of the apartment and it is not clear if she was pushed or jumped out after an argument with the man she was with.

An autopsy was planned on the body on Tuesday to establish how she died.

According to police, the officer attached to Directorate of Criminal Investigations headquarters has been having domestic issues with the woman.

“There was a heated argument and commotion which led to the falling of the lady from the fourth floor balcony,” a witness told police.

The woman was rushed to Kenyatta National Hospital where she was pronounced dead on arrival.

Before the police arrived at the scene, the main suspect in the incident managed to flee.

Witnesses said neighbours who responded, the officer threatened them with a gun before taking off, soon after they rushed to see what had caused the loud bang.

It is not clear what prompted the incident.

Kasarani sub-county Commander Peter Mwanzo said they are interrogating the officer and will know the way forward soon.

“We don’t know if it was an accident or he did it. We are talking to him to tell us more,” he said.

Dubbed “Muamko Mpya-Healing the Uniform” the program strives to create and hold safe spaces in police stations, offices, camps, colleges and communities thus enhancing peer to peer support for officers to feel safe enough and dignified to share their stories and experiences of stress, anguish and trauma in a confidential and non-judgemental environment.

Mutyambai said he is passionate about healing the police of stress and trauma they regularly experience in the course of their duty.

He said while it is true that every person experiences stress and trauma, the disciplined service is unique in that whenever they go out on their day to day activities, they encounter scenarios and incidents that are stressful and traumatic, leaving emotional wounds in their hearts even as they continue providing safety and security of the citizens.

According to a Kenyatta University Research Study (2012) on factors contributing to stress, suicide and murder among police officers in Kenya, the work of a police officer is often exhausting, dangerous, and even traumatic.

It further states that police are generally at the receiving end of all community problems.

They are expected to maintain law and order in very difficult situations besides putting their lives at risk as soon as they leave home every day.

Mourner after mourner hailed the fallen soldier as a dedicated, disciplined, dependable and accomplished radar technician whose untimely demise had ...
Exclusives
1 year ago