• Hafsa used Lukman's phone to withdraw money at a nearby M-Pesa shop and paid the rent for the house.

• Later that night, according to a caretaker, Hafsa and two other men parked a black car outside the house. 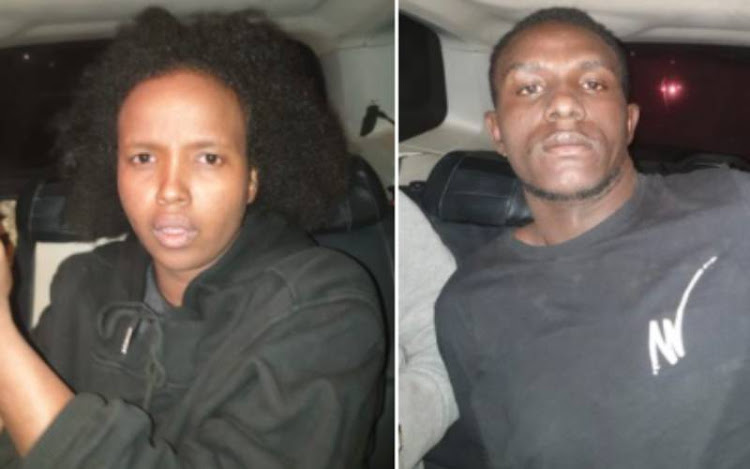 A woman thought to have been abducted two weeks ago in Nairobi was on Sunday found in a lodging in Naivasha.

Police said she was part of the plot to kidnap her businesswoman friend, Hafsa Mohamed Lukman, 23, who went missing on June 15.

Hafsa Ahmed Abdi was found with a wanted suspect in the kidnapping.

The suspect identified as Jackson Njogu runs a business in Kayole where Lukman was kidnapped on June 15.

Police said Hafsa and Njogu were traced to a lodging at the Flyover Junction near Naivasha where they were hiding since Lukman was rescued from an empty water tank in a house in Matopeni, Kayole.

Police said the two were suspects in the kidnapping of Lukman who was tortured as her kidnappers demanded Sh5 million ransom before she was rescued on June 20.

Police established the two syphoned Sh650,000 from Lukman's bank accounts while she was in captivity.

They then escaped to Kinangop and purchased a bar, which they were operating.

The two were taken for medical checks and were detained ahead of possible arraignment.

The arrests increased to three the number of suspects held over the kidnapping that shocked everyone because of Lukman's torture.

Police have revealed Lukman's abductors lured her from Eastleigh with a business deal to supply watermelons, and then demanded a Sh5 million ransom.

Hafsa runs a watermelon business in Kayole. She has been getting the fruits from Bura and Garissa.

Lukman, who runs a clothing shop in Kamukunji, was rescued from a house where she had been kept captive in a broken water tank.

He requested they meet at Kayole Junction so she could be incorporated into a fruit supply business.

When she arrived at Kayole Junction accompanied by Hafsa who owns a shop there, they entered the shop and held a short prayer.

But as they were leaving the shop, they were met by two men who abducted the victim and took her into a secret location in the area.

Njogu was arrested after his mobile phone signals were traced very close to where Hafsa was being held.

Wandia told the court Njogu was also in constant communication with other suspects who are still on the run.

“On June, 20 the victim managed to peep through the door opening where she was confined. She saw a child passing by and requested help,” she said.

The child informed her father who called the police from Kayole police station.

It has emerged Hafsa sought the house where Lukman was held on June 11 but did not pay at first.

However, she called four days later with Lukman's number in order to guarantee payment.

Hafsa used Lukman's phone to withdraw money at a nearby M-Pesa shop and paid the rent for the house.

Later that night, according to a caretaker, Hafsa and two other men parked a black car outside the house.

They had bought the imprisonment tank as well as other essential house items.

On June, 20 the victim managed to peep through the door opening where she was confined. She saw a child passing by and requested help.

Tenants of other houses near where Lukman was rescued said it was rented by two people, presumed to be a couple.

The neighbours also said the house constantly had loud music playing during the day, which did not raise eyebrows at first.

Hafsa’s sister, Zuhura Zuheira, had earlier said the family had visited several hospitals and even mortuaries in a futile search for her.

“Every member of the family has been tasked to make rounds in different areas in the hope of finding her,” she said.

Zuheira said the clothes and shoes, which her sister was last seen wearing, were found within Kayole, stained with blood.

They did not know she was part of the kidnap gang. Police said the two are expected in court Monday or Tuesday.

Police are looking for more suspects.

Lukman was rescued from a house where she had been kept captive in a broken water tank.
Lifestyle
3 weeks ago