• Caught off guard Esther said no, but what the people did not know is that she said so as she couldn't believe she had been tricked. 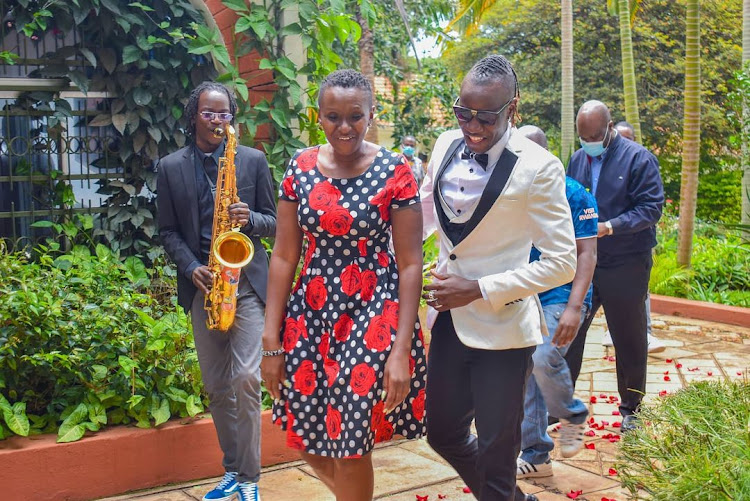 Guardian Angel has revealed that he proposed to his bae Esther Musila twice with the first time being a joke gone wrong.

During the first proposal which happened at home, Guardian was trying to indirectly check what ring size Esther wore.

This he did by 'duping' her to remove a ring she has had for so many years.

Speaking during an interview with Ala C, the 'Nadeka' hitmaker revealed,

''I was just trying to see her response so I knelt beside the bed and proposed, I was joking but she took it seriously.

That is when I decided to make it official. I planned for it without her knowledge and officially proposed on her 50th birthday.''

Maina had told me that Guardian is very polite just to prepare me mentally, so we started talking and I asked him to put the ‘Rada’ song as my skiza ...
Entertainment
11 months ago

Esther said the proposal caught her by surprise as she had not seen any signs from her man to insinuate he wanted to make things official.

''I was tricked into it.

I had this ring that I always wore, I bought it when I turned 40 so one day he asked me to remove it and took it and wore it on his finger.

I kept asking for it and he would keep asking if it had any hidden reason for wearing it, so I gave up and let him keep it.

On the day of the proposal, He lied that we were to sign a deal so he asked me to wear a dress to look presentable.

So we went to Karen, got into the studio and he left me for a while. I wanted to go check where he went as I felt he had taken too long.

As I was about to go to the door I heard someone play the saxophone and I saw people I had not noticed before.

There were roses and a cake.

I was surprised given he had told me he could not give me anything for my birthday as he had used up all his money on a project.

As I was cutting the cake I looked back and saw him on the floor.''

Put your house in order! Jamal reacts to wives insulting each other

According to Jamal, this did not go well as his wife went mute on him for days into weeks.
Entertainment
11 months ago

Caught off guard Esther said no, but what the people did not know is that she said so as she couldn't believe she had been tricked.

The no was because of the disbelief, I never expected it. I was scared of the news reaching social media before my kids learned about it.

When I called my daughter she was like 'Are you pregnant?' but when she learned I was engaged she was very happy for me.

So were my sons, knowing that my kids were for it was the best moment for me.''