Kericho man living with bullets in his body seeks help

He was not sure whether he was alive or dead...

Piece by: KNA by Sarah Njagi

• A passerby later rushed him to the Kericho County Referral Hospital using the mortuary entrance where he was immediately taken for an operation and later admitted to a patient ward at the facility.

•  His 28-year-old wife, Caroline Chepkoech, revealed that he met Kiprono in 2010 and decided to spend the rest of his life with him knowing too well that life with him would be full of challenges as he had two bullets lodged in his body. 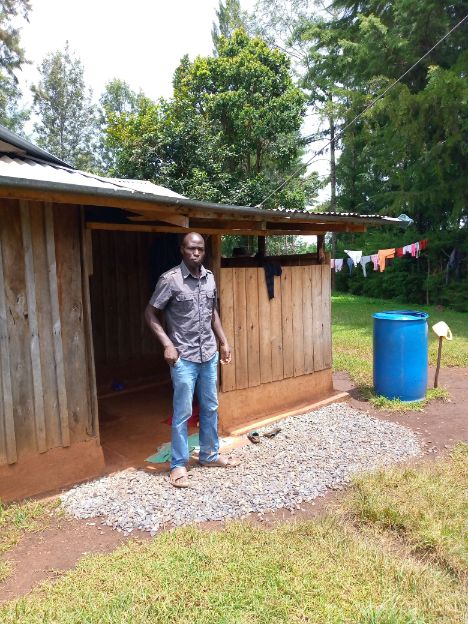 Collins Kiprono, who has been living with bullets lodged inside his chest region for the last 14 years standing outside his wooden house at Telanet village within Kericho County.
Image: Photo by Sarah Njagi

Life has not been easy for one, Collins Kiprono, a resident of Telanet village, Kericho County, who has been living with two bullets lodged in his chest for the last 14 years.

Kiprono, 37, was hit by stray bullets in Kericho town as police dispersed demonstrators in the wake of the 2007/2008 post-election violence and his life has never been the same again.

In an interview with KNA at his home, Sunday, Kiprono tearfully narrated how his health began deteriorating in the last three years.

“Since then each time I engage myself in heavy tasks such as digging my shamba or carrying heavy loads I always cough blood and I experience laboured breathing.

I cannot stand up straight each time I wake up in the morning. I have to wait for several minutes for my back muscles to relax on their own before I can stand up and walk. I now walk with a slight hunch,” he said.

Police are looking for a gang that raided a home of a businessman in Muthaiga area, Nairobi and robbed the family of jewelry and cash.
Lifestyle
6 days ago

The father of three now earns a living by roasting maize at Kapsoit market, a venture he opted to take due to his ill health.

“I used to engage in farming and selling of maize and beans to the surrounding markets within my area but currently due to my failing health, I stopped all this.

Kiprono buys maize from other farmers from different Sub-counties within Kericho and roast and sells them within Kapsoit market.

“I am committed to this business, having started it in 2015 and the monies I earn goes to providing for all the basic needs of my family,” he added.

But with the bullets still lodged in his body, Kiprono knows only too well that time was gradually ticking away and he was living on borrowed period.

“My greatest pleasure is spending time with my family. Time is a gift most of us take for granted.  I am always worried about my fate and it is not easy to live with bullets in your body,” he states with sadness.

Having defaulted on his monthly  National Hospital Insurance Fund (NHIF) contributions as the meagre proceeds from his maize roasting business are not adequate to cater for all his family’s needs.

The class eight drop-out is now appealing for medical and financial assistance due to his deteriorating health.

“From July 2013 I have defaulted on my Sh500 monthly NHIF contributions. I used to engage in casual work but the monies I would get paid would all go to feeding my young family. Currently, my two daughters are in primary school, the eldest in Class Six and I am not able to go for another X-ray to confirm my health status,” he added.

He was not sure whether he was alive or dead, but the sight of blood on his torn short made him cry for help while lying on the stone pavement near the Kericho County Referral Hospital Mortuary.

The firstborn in a family of three, Kiprono narrates how on that fateful day in 2007 he had paid a visit to his grandmother’s home at Kipchimchim village on the outskirts of Kericho town.

He then decided to walk to Kericho town, while heading back to his home.

On reaching Kericho town, he met a crowd of people and was not sure what was happening.

But the mere sight of police officers brought him to the reality that all was not well and he immediately started running with no clear direction where he was going.

Kiprono adds that suddenly he started sweating profusely with abrupt body weakness and he felt as if some cold water was being poured on him.

He was not sure whether he was alive or dead, but the sight of blood on his torn short made him cry for help while lying on the stone pavement near the Kericho County Referral Hospital Mortuary.

A passerby later rushed him to the Kericho County Referral Hospital using the mortuary entrance where he was immediately taken for an operation and later admitted to a patient ward at the facility. 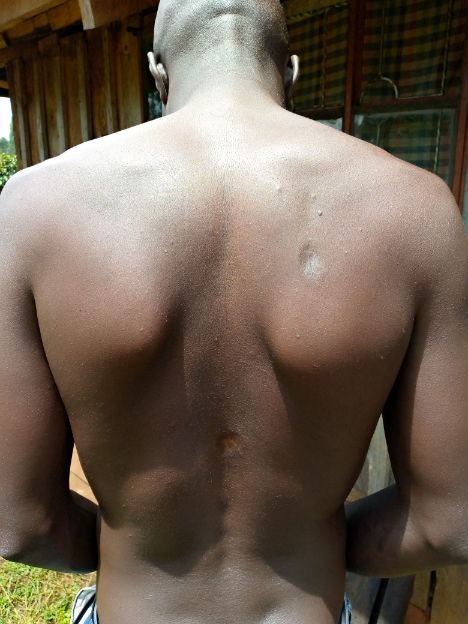 Collins Kiprono shows his back where the bullets hit before embedded inside his chest cavity.
Image: Photo by Sarah Njagi

Bien Barasa of the boy band Sauti Sol is scared for his life after a BBC report said that bald men are being killed and their heads used for rituals.
Entertainment
6 days ago

He was to remain there for the next three days before being discharged, but with bullets still lodged in his chest as doctors maintained that any operation could be fatal.

“I came to know later that I was shot and two bullets were lodged in my chest. I only got to know about this from the doctors attending to me while admitted at the Kericho County Referral Hospital,” he added.

His family members took him to Tenwek Mission Hospital where an X-ray confirmed his worst fears that any operation conducted to remove the bullets would be very risky.

A Medical Discharge Summary dated 17th January 2008 from the medical facility confirms that he has bullets lodged in his body.

His back confirms the same, with two distinct permanent marks clearly showing the bullets directed from behind, before being embedded inside his chest cavity.

The doctors advised him to be attending medical checkups on a regular basis, a thing Kiprono admits he has not been committed to due to his low income.

“Being a class eight drop-out, I have dreams of my children growing up to be better persons in the society. I have never disclosed to them about my condition,” adds Kiprono.

His 28-year-old wife, Caroline Chepkoech, revealed that he met Kiprono in 2010 and decided to spend the rest of his life with him knowing too well that life with him would be full of challenges as he had two bullets lodged in his body.

However, at the moment Chepkoech is deeply worried as her husband, the family’s breadwinner has been coughing blood and prays that he gets immediate assistance to restore his health.

“I believe God will one day answer my husband’s prayer that he gets better. It is not easy when I see the amount of blood he coughs out. I worry a lot about his future,” added the distressed Chepkoech.

Nigerian pastor TB Joshua who died on Saturday at the age of 57 had earlier indicated that he was not going to celebrate his 58th birthday on June ...
Lifestyle
6 days ago