The FBI bow out of the murder case

• It is not exactly clear why the FBI made the drastic decision.

• Bashir family lawyer Charles Madowo had initially confirmed one FBI agent had been detailed to the probe given that the trader was an American citizen. 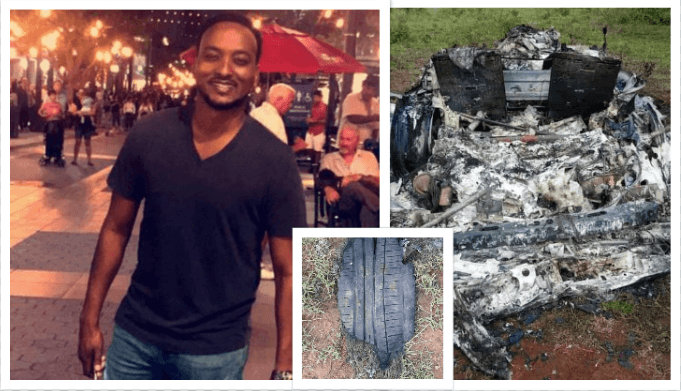 Bashir Mohamoud and the crime scene where his Range Rover was burnt to ashes.

The Federal Bureau of Investigations will no longer take part in unearthing the killing of Somali-American Mohammed Bashir Mohamoud, police sources indicate.

Detectives at the heart of the case say the bureau withdrew from the probe, saying it "is a purely Kenyan issue".

It is not exactly clear why the FBI made the drastic decision. Bashir family lawyer Charles Madowo had initially confirmed one FBI agent had been detailed to the probe given that the trader was an American citizen.

On Tuesday, efforts to obtain comments from the family or its legal team were futile as they did not return calls.

The Star has learnt that the long working theory in the probe is that the father of three had multiple bank accounts that had transactions running into millions of shillings wired back to his native country Somalia. Detectives believe the money "found their way into the hands of bad people who are our enemies."

"There is no way you can trade with our government, use our money to fund our enemies and assume we won't catch you. No way," a senior detective with authoritative knowledge of the investigations said on condition of anonymity.

Sources also say the FBI pulled out because "it was them who handed the man to us."

Multiple sources insist that FBI agents are the ones who gave the leads that helped in the nabbing of the trader. It is, however, not clear why he was not subjected to the criminal justice process if at all he had committed any wrongdoing.

To cover for the legal misses in this whole saga, a detective suggested that official communication from the state about the killing may soon suggest that it was a "normal crime to be condemned as reprehensible".

Family lawyers had written to Director of Public Prosecutions Noordin Haji to institute an independent inquest to run parallel to the police investigations.

Bashir's body was discovered at the bank of the Nyamindi River in Kerugoya, Kirinyaga, after he disappeared on May 13 in Nairobi.

The 36-year-old contractor went missing after he visited the Lavington-based Miale entertainment lounge for Eid celebrations. His black Range Rover seemed blocked by another car shortly after he left the establishment.

His car was later found burnt to a shell in a thicket in Kibiku area of Ngong' in Kajiado county. The shell was later evacuated from the scene by unknown people under unclear circumstances.

Bashir was buried at Lang'ata cemetery on May 24.