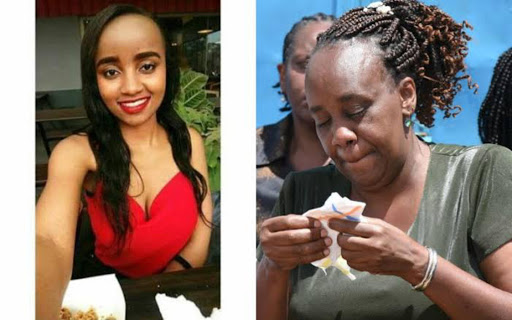 The family of slain university student Ivy Wangechi is crying foul over a two year delay in seeking justice on against murder suspect Naftali Kinuthia.

protested over delays in hearing the murder case at the High Court.

The murder case against suspect Naftali Kinuthia was adjourned yesterday for the fifth time after the lawyer representing the suspect withdrew from the matter at the last minute.

Ngegwa Kirojo who is lawyer for the victim's family protested against the adjournments saying the family was being denied justice in the matter whose hearing had failed to start for two years.

Mother to the deceased Winfred Waithera angrily protested against delays in the case but vowed to fight on until she gets justice for her daughter.

Wangechi was attacked and hacked to death near the Moi Referral Hospital in April 2019 by the suspect who is remand prison since then awaiting trial a the High Court where Justice Samwel Githinji is handling the case.