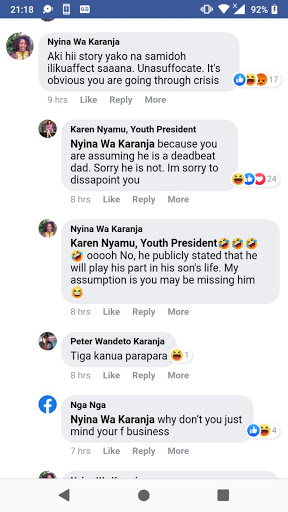 Karen Nyamu has defended her baby daddy Sammidoh saying he is not a deadbeat as claimed by a section of Kenyans.

Nyamu sired a son with Mugithi Maestro Sammidoh seven months ago and they have been co-parenting.

To which Karen responded,

‘Because you are assuming he is a dead beat dad. Sorry he is not, sorry to disappoint you.’

Not one to back down the fan added that even though Sammidoh was present in his son’s life it’s obvious Nyamu missed him.

‘Oooh nooo, he publicly stated that he will play his part in his child’s life. My assumption is that you may be missing him.'

Sammidoh publicly admitted to straying in his marriage and siring a son with the former Nairobi Women Rep aspirant.

He said he would take care of the child as any responsible father would.