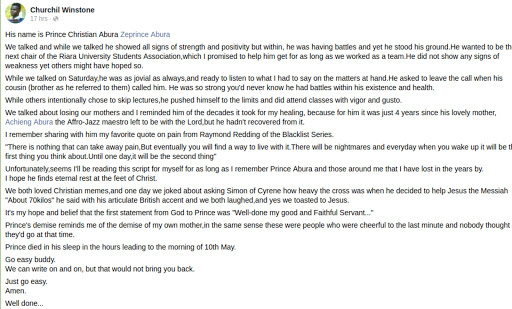 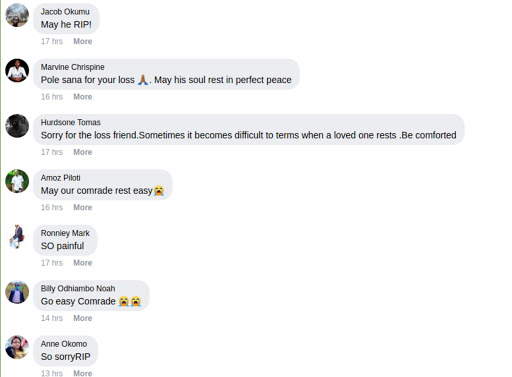 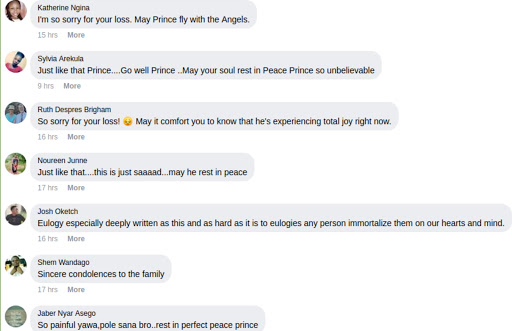 "Today I announce with a humble heart the passing on to glory of Prince Abura in his sleep. I just want to thank all who supported this worthy course. He was to graduate at Riara University in September," read a statement

"May God remember you in your time of need. More updates soon as we close this fundraiser. To donate securely to the Prince Abura Sickle Cell Fund, a treasurer-controlled fundraiser, M-Pesa: Paybill No. 891300 Account No. Abura."

A friend, Winstone Churchill narrated how his conversation went with Prince before his death.

"We talked and while we talked he showed all signs of strength and positivity but within, he was having battles and yet he stood his ground. He wanted to be the next chair of the Riara University Students Association, which I promised to help him get for as long as we worked as a team. He did not show any signs of weakness yet others might have hoped so."

He added that Prince was jovial in their last conversation.

While we talked on Saturday, he was as jovial as always, and ready to listen to what I had to say on the matters at hand. He asked to leave the call when his cousin (brother as he referred to them) called him. He was so strong you'd never know he had battles within his existence and health.

While others intentionally chose to skip lectures, he pushed himself to the limits and did attend classes with vigor and gusto.

The friend went on to share detailed of the moments he had with Prince including previous conversations.

We talked about losing our mothers and I reminded him of the decades it took for my healing, because for him it was just 4 years since his lovely mother, Achieng Abura the Affro-Jazz maestro left to be with the Lord, but he hadn't recovered from it.

I remember sharing with him my favorite quote on pain from Raymond Redding of the Blacklist Series.

"There is nothing that can take away pain, But eventually you will find a way to live with it.There will be nightmares and everyday when you wake up it will be the first thing you think about. Until one day, it will be the second thing"

Unfortunately, seems I'll be reading this script for myself for as long as I remember Prince Abura and those around me that I have lost in the years by.

I hope he finds eternal rest at the feet of Christ.

We both loved Christian memes, and one day we joked about asking Simon of Cyrene how heavy the cross was when he decided to help Jesus the Messiah "About 70kilos" he said with his articulate British accent and we both laughed,and yes we toasted to Jesus.

It's my hope and belief that the first statement from God to Prince was "Well-done my good and Faithful Servant..."

Prince's demise reminds me of the demise of my own mother, in the same sense these were people who were cheerful to the last minute and nobody thought they'd go at that time.

Prince died in his sleep in the hours leading to the morning of 10th May.

We can write on and on, but that would not bring you back.

Here are tributes from fans;