Sarah Kabu denies claims her husband cheated on her, says many women have tried sending him DMs but failed 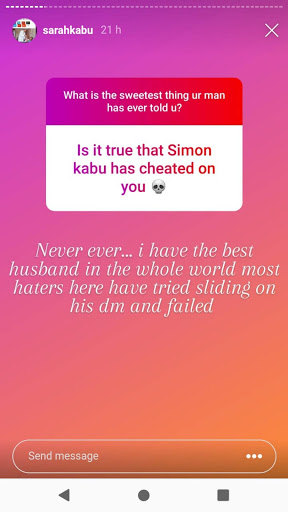 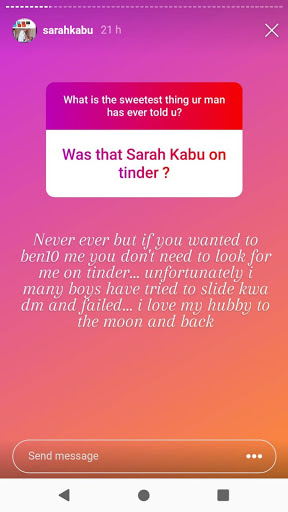 Sarah Kabu has denied claims that her husband and Bonfire Adventures co-founder Simon Kabu has ever cheated on her in the past.

According to the mother of three, women have tried sliding in his DM, but failed to capture his heart.

This she revealed during a Q and A segment with fans on her Instagram.

“Is it true that Simon Kabu has cheated on you?” asked the fan

To which Sarah responded

“Never ever, I have the best husband in the whole world. Most haters here have tried sliding into his DM and failed,” she stated.

She was also quick to point out that she is not ready nor will she ever accept any Ben 10.

“Was that Sarah Kabu on Tinder?” asked a fan

To which Sarah responded

“Never ever, but if you want to Ben 10 me, you don’t need to look for me on Tinder. Unfortunately, many boys have tried to slide into my DM and failed. I love my hubby to the moon and back,”

Sarah has been on the receiving end several times with the recent being the fact that she had defended Kabi Wa Jesus from claims he sired a child with his cousin.

She was left with egg on the face after DNA results confirmed that Abby was indeed Kabi Wa Jesus' daughter.

Now you know Simon Kabu has never cheated and won't be doing so according to his wife.