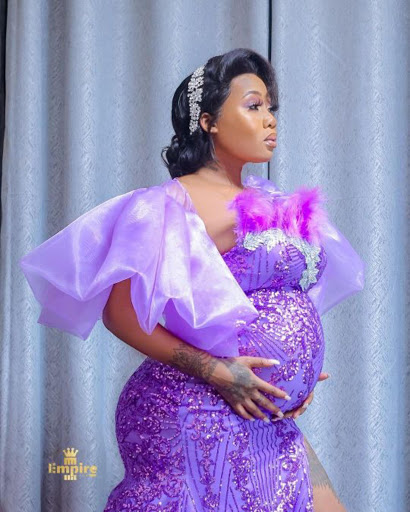 Tanzanian artist Amber Lulu has for the first time shown her daughter's face on social media, months after she delivered her.

Baby Arianna as she is fondly called, has been chosen as a brand ambassador for Africana Baby Soap.

Lulu,  who is ex girlfriend to Kenyan rapper Prezzo, has also taken to her social media asking God to forgive people calling her names despite knowing the struggles one goes through becoming a mother.

This was after a section of female fans made mean remarks about the facial appearance of Lulu's daughter, which are non existent by the way.

In 2018, Amber Lulu had been accused of allegedly terminating Prezzo's  pregnancy.

The source however, did not reveal how long Amber Lulu had carried the pregnancy before terminating it, only saying: “the baby bump had begun to show”.

The insider says Amber Lulu got pregnant while staying with CMB Prezzo in Kenya. Her trip and stay in Kenya was recent, she said.

“When she returned to Tanzania, she did her best to hide her baby bump. She did not want people to know that she was expectant. Furthermore, she feared losing concerts had her pregnancy news been known,” said the source.

The informant further claimed that even CMB Prezzo was kept in the dark about Amber Lulu’s pregnancy.

“When Amber got pregnant by Prezzo, she was not in good terms with him. She, therefore, decided to keep news about her pregnancy under wraps. She feared the rapper would ditch her; and that would force her to raise the child alone,” said the source.

When reached for comment by Global Publishers, Amber Lulu denied the claims.

Congratulations to her on being a new mum.