'I never believed in marriage,' Vera Sidika on secrets of happy marriage to Brown Mauzo 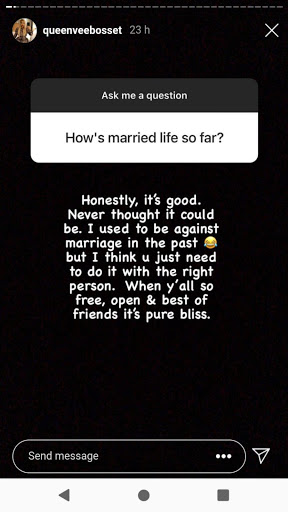 Vera Sidika says she never believed in marriage until she met and fell in love with her current husband, Mombasa based artist Brown Mauzo.

The couple has been dating for a year but most Kenyans still believe it's an act something that Vera has strongly refuted.

'How is married life so far,' asked a fan during a Q and A segment with Vera.

To which she responded,

Honestly, it's good. Never thought it could be. I used to be against marriage in the past  but I think u just need to do it with the right person. When y'all so free, open & best of friends it's pure bliss.

While responding to a fan, Vera affirmed that her marriage is real and that were it not they would have gotten tired of 'acting'.

‘LOOKING FORWARD TO THE DAY YOUR ACT WITH MAUZO ENDS,’ WROTE THE FAN.

To which Vera responded,

‘WELL, I DON’T UNDERSTAND WHICH ACT YOU ARE TALKING ABOUT, BUT WE’RE NOT ACTORS. IF AT ALL WE ARE ACTORS AS YOU CLAIM, WE ARE  BAD ACTORS. LOL COZ THERE’S NOTHING WE DO. WE DON’T EVEN POST 9-5 ON DAILY & IT’S BEEN ALMOST A YEAR. MUST BE A BORING MOVIE FOR Y’ALL TO WATCH.’

Asked whether she feels she has achieved what she would have wanted in life, Vera responded that she couldn't ask for more.