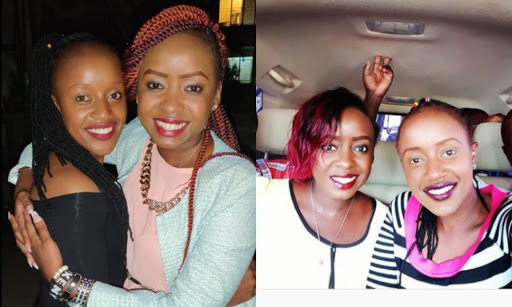 Jacque Maribe has a new best friend after her former group of friends 'betrayed' her. The media personality has a string of friends until in September 2018 when she was arrested alongside her ex over Jowie, the main suspect in Monica Kimani's murder.

In a recent interview with True Love, the mother of one while talking about her ex girls squad said,

'A LOT OF MY ‘FRIENDS’, DID NOT WANT TO ASSOCIATE WITH ME, PEOPLE WHO I REALLY THOUGHT I WAS VERY CLOSE TO. SOME, I HEARD DID PUBLIC STATEMENTS. I DID NOT SEE THEM, DISASSOCIATING THEMSELVES FROM ME. THESE ARE PEOPLE WHO WE HAVE BEEN SEEN GOING ON HOLIDAY WITH, YOU KNOW, BEING TOLD WE ARE SQUAD GOALS. I WILL BE VERY HONEST WITH YOU. I HAVE LIKE TWO FEMALE FRIENDS, TO DATE, WHO STOOD BY ME FROM THE BEGINNING. THE REST OF MY FRIENDS ARE GUYS, BUT NOW YOU COME TO LEARN WHO YOUR TRUE CIRCLE IS. I DON’T WANT TO SAY I LOST MANY FRIENDS BECAUSE THEY WERE NOT FRIENDS, I JUST GAINED TRUE ONES.'

One of her female's best friends is one Chemutai Goin of Citizen TV. The two are very close and below are the things you didn't know about her.

1. She is an award-winning journalist; HSC - In 2020 she was accredited by the President Uhuru for her good work.

3. Worked in the media industry for close to ten years

5. She started her journalism career at KTN, then moved to K24 TV and later joined Citizen TV. She was very instrumental in the 2017 general elections, whereby she covered campaigns in all the 47 counties.

6. She is a bilingual reporter (English and Kiswahili

9. She is humble and hardworking

Recently, Maribe penned a heartwarming message to her which read,

'Appreciating this person who came into my life when I least expected it. One day, I called this woman @chemutaigoin and said, "hi there, my name is Jacque, just wanted to say you'll be called and join the campaign team tomorrow..." she didn't believe me. Then she joined us. We worked together and became best of friends. Now we hang everyday. Miss thang I penda you over and beyond.'