'I lied about the abortion,' Esma explains why 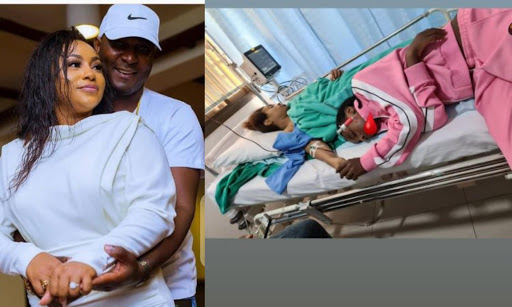 Diamond Platnumz's sister Esma has come out to say that she never aborted her husband's pregnancy. This is after she admitted a few days ago that she terminated his pregnancy since she doesn't love him any more.

Talking about the issue, Esma said she spoke out of anger and apologized to her fans for misleading them

I was sick. No, I was not pregnancy. I did not abort. I am a woman who loves kids and I can never do such a thing.

I said that on social media out of anger. People attacked me and I didn not mean to say that, I spoke out of anger.

I ask people to forgive me but I have never been pregnant for him neither have I ever terminated a pregnancy.

She exposed her husband Msizwa for not taking care of his first wife and his own mother.

"He has five kids, two of which he doesn't give support either. He didn't want his mother to be at our wedding. I went to beg his mother and she refused to come to our wedding. He introduced me to the wrong mother. He is a liar. He came to me to gain fame from me."

Esma says that the man pretended to be a good person to her family.

When he told my mother he wanted to marry me, I told him no, because I was stressed from my previous relationship. And I didn’t want to be married as a third wife.

He used to praise me and talk bad about his wives. I felt convinced. At the time. he never liked social media. He pretended to be a humble person and my parents convinced me to get married

Msizwa was the one who hurried his wedding to Esma and asked for the preparations to be done immediately.

He wanted to marry me immediately. I told him no. He wanted the wedding to be fast. He knew I could change my mind.

He wanted to marry me without dowry, I refused. It should have been five million but he removed two million.

The couple started arguing when Msizwa asked Esma to ask Diamond Platnumz for a loan worth millions to fund his businesses.

He told me to ask Diamond to support his business with Tsh 200 million (Ksh 9.4 M). We started arguing. He started saying on social media that my family and I weren't supporting him.

She also accused him of wanting to do illegal businesses.