'God will avenge us! He was treated like an animal,' kin of Kiambu murder victim cries 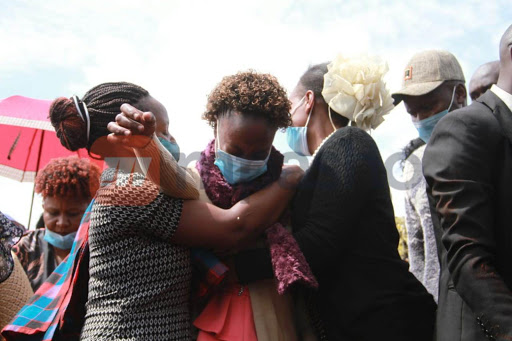 At the funeral of James Kinyanjui Wambaa, 38, the mood was one of anger, victimhood and resignation to fate. James was buried in a public cemetery in Kiambu on Wednesday.

The construction worker was killed in Kiambu along with a family of four has been laid to rest in Gathiga cemetery.

James was the first victim according to the confession of Lawrence Warunge, a son to the couple which was killed in cold blood together with their son and nephew.

The victims' bodies bore wounds that were similar in measurements and depth according to an autopsy report.

The autopsy conducted on Monday showed that the stab wounds on the bodies measured between three and four millimetres.

The results also showed that the body of the construction worker had blunt object trauma besides the stab wounds.

“It appears the assailant found the victim unaware while he could have been asleep. He did not put up much fight in self defence,” the chief pathologist said.

Relatives recounted how hardworking Wambaa left his wife and two children in their Nyahururu home to work as a mason in Kiambaa. Of all he expected, being slaughtered using a kitchen knife was none of it.

Wambaa was among the five people killed last week at a Kiambaa home in Karura, Kang’ong’o village. He was buried on Wednesday at Gathiga cemetery.

It was also fresh reliving of the crime as a member of the family reconstructed the scene of the murder, drawing from news reports and a postmortem examination they witnessed. Most speakers expressed doubt that the whole crime was committed by one person.

“My brother was treated like an animal. His head was severed from the neck. The intestines were out. Signs of beating using a blunt object were clear,” Elizabeth Kinyanjui, Wambaa’s cousin, said.

“I believe this boy (the confessed suspect of the murders) is demon-possessed.”

Widow Florence was speechless all through the low-key service that ran for almost four hours. Her exhaustion from the shock and the emotion of it all too self-evident.

His seven-year-old firstborn son maintained blank stares, perhaps not immediately aware of the implication of the service to his life. His second child played with her hands, oblivious of the fact she will never again see her hardworking dad. She was carried by her mother.

The religious family repeatedly said they had forgiven the killers for the injustice meted out to them. Wambaa was a pastor at a Pentecostal church.

“But even if we are poor, we hope we will get justice, even if it is for the sake of these little children,” said a family member as he paid tribute.

"We laud the DCI for the swift action it appears to be taking. But we hope Kinyanjui gets equal justice as well."

"Maybe it was the will of God. He will avenge for us," yet another relative said.

The burial ceremony was attended by residents and local leaders, area MCA, former MCA and a representative from the governor's office.