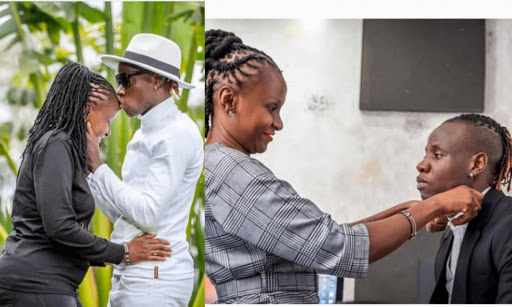 They say age is just a number and it is totally acceptable to get into a relationship with someone who is older or much younger than your partner. The issue of getting married or dating a lady older than the partner is still an issue in the country with many believing that the head of the family should be older in order to get his say in the household. Well it not always worked the traditional way, some celebrities have broken the normal by dating ladies who are older than them and confess in not feeling the pressure and being deeply in love with their partners

1. Bahati- Musician Bahati has for the longest time been subject to trolling because of getting married to Diana Marua who is older than him. In 2020, he trended with haters branding him ‘Mtoto wa Diana’ all thanks to their age difference but that does not bother him as he faces his critics with a bold face and the couple making fun of the mtoto wa Diana troll on their vlog. Bahati remains unbothered on the issue and showers his wife with love and gifts with beautiful messages on social media to let the world know she stole his heart and nothing can tear them apart.

2. Guardian Angel- Gospel singer Guardian Angel has had it rough in 2020 after revealing to fans that his wife is double his age. His wife, Esther Musila who is 50 and the singer stirred a debate online on the age difference with the usual critics not feeling the vibe between the two. For some the gap is too huge for a man and a woman but the singer has been defending his wife till date making it clear that their love is pure and nothing can separate them. Well one thing is for sure Musila looks really gorgeous for her age we get why the artist couldn’t help but look twice.

3. John Allan Namu- He likes to keep his relationship low-key and his life as a whole as private as possible but that does not stop the journalist from sharing his love story. Investigative journalist John Allan Namu met his wife while working as an intern as she was a strict editor, love grew slowly as they got closer and tied the knot in 2010. The hottie who is a ladies’ favorite owing to his good looks revealed that his wife is 3 yrs older than him but that does not make a difference as it has never affected their relationship.

4. Pastor Pius Muiru- The Maximum Miracle center pastor Pius Muiru is also guilty of falling helplessly in love with a woman older than him. For him the story is not different as they have been able to live in harmony and grow deeper in love for decades. Muiru describes his wife as a Proverbs 31 woman. Oh well guess age is just but a number!