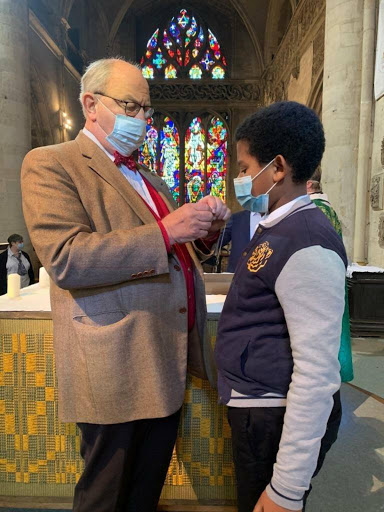 Singer Akothee is a loving and caring mother of her five kids. The single mother, who has three baby daddies loves all of them equally and has aways pampered them with love for being there for their kids. Akothee and the three men are co-parenting.

Well, one of her kids was recently baptised and his stepfather (the father of Akothee's lastborn) was there for him during the ceremony.

'When God says I will walk with you, this is the real meaning of God with us, today is my son's big day, ALFONS MARKUS OJWANG MEYER ,got baptised in the presence of His father who came all the way from Switzerland, His dad papa Oyoo who has been his guardian Angel since he was 2 weeks old 🙏🏻😭, His younger brother Oyoo fundi bao, his Sister FANCY MAKADIA, who came all the way from ROUEN , to CHERBUOG. We were to have this done in April, then Corona came,now I have missed this big family occasion, my heart is bleeding ❤️, but why can't this PAPA OYOO BE NAMED ANGEL DOMINIC ?

THIS IS THE ONLY MAN WHO understands THE FUNDAMENTALS OF FAMILY 🙏

He goes to church with his kids every Sunday,' she posted accompanied by the pic below.

Check out photos of the singer with her mzungu baby daddy before and after fame.