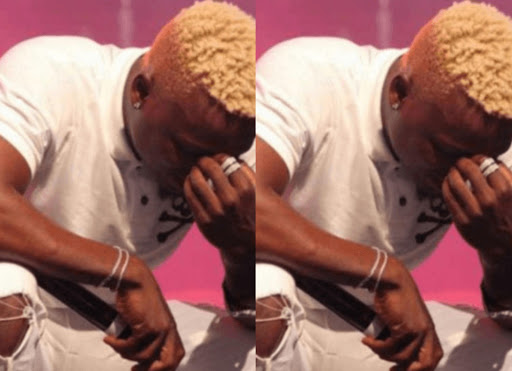 Singer Harmonize was performing over the weekend at the Mkapa Stadium in Tanzania where Yanga football club was releasing their players for the 2020/21 season.

Harmonize made a grand entrance that saw him drop into the stadium using a in zip-line.

But the stunt did not go as planned.

The singer fell and was helped up by people.

The stunt cost Harmonize alot because it left him breathless and unable to perform.

This comes a week after Diamond performed at the same stadium when he also made a grand entrance using a helicopter.

PLEASE DON'T TRY THIS AT HOME

Well, one of Diamond's fan commented that his ex-protege's stunt had failed.

(one of your boys feel down, i think he forgot the training he did at wcb)

Diamond then replied by asking people not to laugh at Harmonize.

(Accidents at work happens, don't laugh, pray for him)

Check out the dangerous Harmonize entrance;