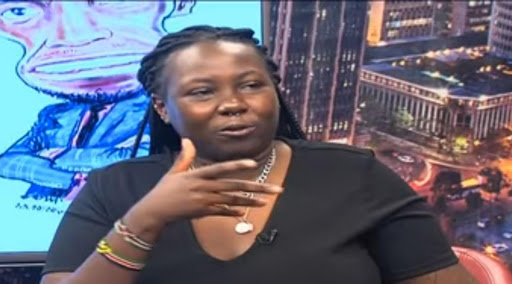 Days after walking out of a live interview over an anxiety attack, comedian Chebet Ronoh has spoken about her battle with depression.

Not only did she battle depression but suicidal thoughts as well.

Ronoh said she had studied to be a doctor but chose comedy instead.

'I finished high school and went to BrookHouse to do sciences because I wanted to become a doctor but that was not my calling and so I left school to join radio and things were looking good at that time."

But things were moving too fast and I wasn't prepared for this. I was on radio but I felt I was very unhappy. I felt like I didn't want to do it at that time of my life.

It was overwhelming for me and I started getting anxiety attacks a lot. Like I didn't know I was known. Walking on the road in shorts and a big tee and people would stop me on the road.'

People would say hi and I literally panic because I did not know how to respond and what side of me to show.

If you know me you know the Ronoh I was presenting was not me. It was a personality I was associating myself with.

Which gave me bad anxiety and so drinking was my go-to so that I could get comfortable around people."

'I lost a lot of my real G's because people get tired of being there for you and that hit me so hard.

When I quit my job I wanted to just focus on Ronoh but it was hard because I did not have my real friends. So many people were using me yet they are not here now.

I was not used to people being all about my business because my mistakes were always amplified and that messed me up. I felt people were really entitled to me.

I broke down and lost myself completely I won't even lie. It was the worst feeling of my life. I would cry every day. I used to take Ubers everywhere sitting at the back and thinking if I throw myself and no one will care.

I thought maybe I would make people's life easier and I will stop annoying people. A lot of people talked a lot of sh*t and that got to me." An emotional Ronoh shared on her YouTube channel.