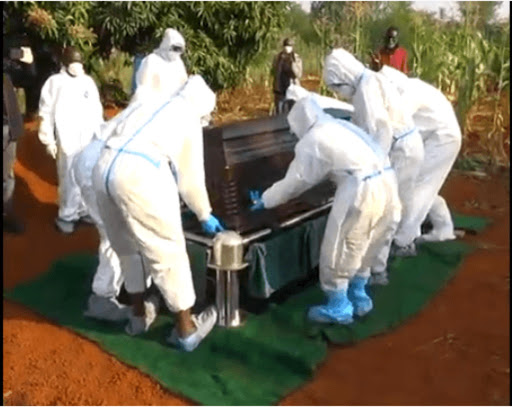 The body of TV comedian Charles Bukeko, popularly known as Papa Shirandula, arrived at his Funyula home in Busia County at 3:27 am for burial.

Papa breathed his last on Saturday morning at Karen Hospital.

Here are five things at the much publicised burial of  Papa Shirandula star that raised eyebrows.

His body was carried in a hearse from Nairobi to his village in Busia, believed to be a distance of about 450 kilometres.

2. Those who accompanied Papa were not allowed to mingle and spent the rest of the night and morning in one tent.  Authorities asked locals not to mingle with them to avoid the spread of the disease.

3. All the vehicles used for transport were fumigated as required by the strict Covid-19 directives.

4. His pal bearers were men in white hazmet suits. No one else was allowed to touch the coffin.

5.  Only 10 members of Papa's family were allowed to be by his grave site for the final rites. By 8:47am his body had been lowered to the grave.