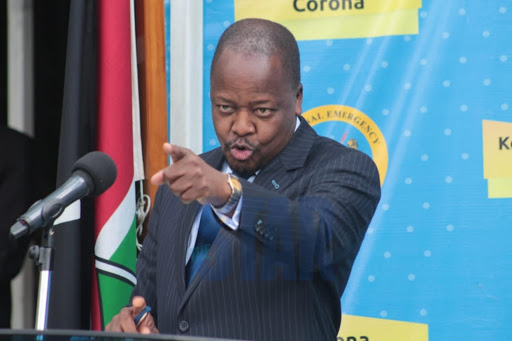 Kenyans on social media are asking Health CS Mutahi Kagwe to join comedy after this pandemic is over. On Thursday, the CS was responding to the case of Pastor Robert Burale's ailment.
"Me, I never heard of this guy. You are saying he has been paid by who? When it comes to issues like rumours, if I were to respond to every rumour I would be very busy, I honestly don't know about this Robert guy. The guy is probably sick but you have decided that he is not,' said Kagwe
This comes days after Burale revealed that he has COVID-19. Hours later, he trended on social media with different people having mixed reactions of a video he took while in hospital

Comedian Churchill has now shared a video of CS Kagwe talking about Burale whom he called 'Murathe'.

From Burale to Murathe huh, even his facial expression of failing to decode the name properly sincerely depicts an affront to the esteemed gentleman, Robert Burale.

He gives me Kibaki Vibes.. ama? 😂😂😂 am laughing alone

Kagwe when we choose to be serious you start afresh 😂 Mungu anakuona, get well soon Burale.