From Jowie to Akothee: Celebs who were once pastors and church choir members but are no more 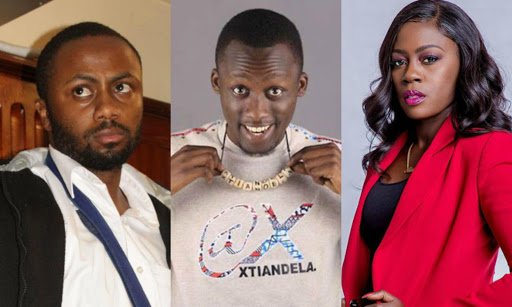 Growing up in a Christian or religious family one is expected to live according to the Bible. Preach and spread the gospel to win lost souls to Christ.

Well, we have several celebrities in the local industry whose parents are staunch Christians and even leaders in their different churches. Esther Wahome and Victoria Kimani are some of them.

We also have quite a number who started their careers in the church, played major roles such as teaching children during Sunday School and singing in the church choir but along the way, they stopped due to one reason or another.

From Akothee to Jowie below are celebrities who once served in church before fame and money.

He is the main suspect in the murder of businesswoman Monicah Kimani. Jowie, who was arrested in 2018 and spent 18 months in prison before he was released on bail was once a churchgoer and choir member.

He was born in a religious family, attended Agape Church located in Pangani estate Nakuru county and is the founder of Agape Stormers choir.

A source who spoke to a local daily when Jowie was arrested, said,

HE WAS A MEMBER OF THIS CHURCH AND A STAUNCH CHOIR MEMBER. I KNEW HIM PERSONALLY AND I WAS SHOCKED WHEN I LEARNT THAT HE HAS BEEN ARRESTED IN CONNECTION WITH THE MURDER OF A YOUNG WOMAN IN KILIMANI, NAIROBI.

I DON’T KNOW MUCH OF HIS PRESENT LIFESTYLE. HOWEVER, DURING OUR GOOD TIMES HE WAS A STAUNCH CHURCH MEMBER AT AGAPE CHURCH AND A SUPERB VOCALIST IN THE CHURCH CHOIR.

HE WAS SUCH AN AMAZING YOUNG MAN WHO WAS MUSICALLY CORRECT AND WITH SUPERB VOCALS.

Jowie's hunk looks always leave women yearning to have a piece of him and you can imagine if he continued with his singing career. He would be the best selling artiste in Kenya.

The Godfather of Kenyan comedy was a youth leader in his church back in the early 2000s. He used to work hand in hand with gospel superstar Rufftone.

'WE WERE BOTH SUNDAY SCHOOL TEACHERS AT THE KAG BURUBURU. KIDOGO TU CHANGE WATOTO DIAPERS,' Rufftone wrote accompanied by the photo below.

But along the way, after having three kids, things changed. Akothee disclosed that she quit gospel for secular music after she found out that Christians or rather churchgoers were hypocritical and judgemental.

"DON’T YOU KNOW THAT I WAS THE BEST SOLOIST IN MY CHURCH! DO YOU KNOW THAT THE CHURCH CHOIR WOULD FEEL EMPTY IN MY ABSENCE? AND THE DAY I MISS CHURCH EVERYONE WOULD KNOW THAT MAMA VESHA WAS NOT IN CHURCH TODAY! DO YOU KNOW WHY I STOPPED GOSPEL AND WENT SECULAR? IT’S BECAUSE I COULD NOT KEEP UP WITH THE HYPOCRISY, THE MOMENT I GOT DIVORCED, THE ENTIRE CHURCH MEMBERS I KNEW, FAMILY FRIENDS ETC, TURNED THEIR BACK ON ME, NONE OF THEM OR THEIR WIVES WANTED TO ASSOCIATE WITH ME. PREACHERS USED MY FAMILY STATUS AS AN EXAMPLE TO PREACH IN CHURCH! GAVE ME ALL KINDS OF NAMES BECAUSE THEY HEARD THE STORY FROM ONE SIDE! NO ONE WANTED TO ASSOCIATE WITH ME," Akothee posted on social media.

He is one of the most sought after journalists in the local media industry.

Mark, a father of two grew up in church and used to sing in choir. Previously speaking about his upbringing, he said,

He was born Abdullahi Masai but later changed to Mark Masai. He grew up in a Christian setting. He was raised by a foster mother Mary, who was a missionary under African Mission Church.

Masai was in the African Children Choir and toured the US in the early ’90s where the performed to thousands of people in churches.

He started his media career at Hope FM, a Christian station

At some point, he was a matatu tout/condutor.

He used to sing gospel music back at his home church in Ukambani way back. He was also a church youth leader at one point in his life.

But after fame, he stopped.

The controversial Twitter bigwig and former Kiss FM employee has been the talk of the town after opening 'Club COVID'  where underdressed women compete to twerk live on Instagram and get paid.

The controversial Kiss FM presenter was once a zealous follower of the gospel back in 2012 together with Pastor Robert Burale.

Kibe was also a motivational speaker and his talks saved many lost sheep.

Although those who knew him back then claim Kibe was a pastor but he came out to refute the claims.

NEVER A PASTOR BUT I ACTUALLY THOUGHT ABOUT BECOMING ONE.