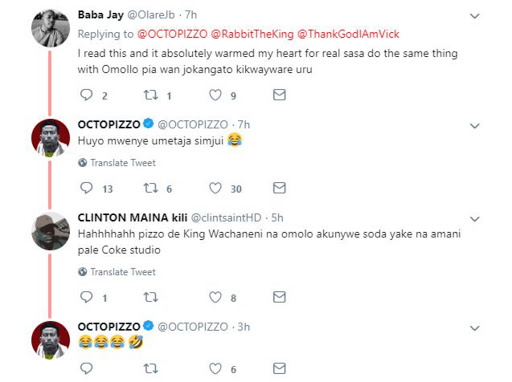 In the world of entertainment, celebrities have always stepped on each other's toe. And East Africa is no different!

For some the beef has paid off by adding a bigger fanbase to their brand but for others, it has been a total failure.

It started off quite well for the ex-love birds with trips to Malaysia, flaunting their love on social media to releasing music videos. However, their romance did not end well because Otile exposed their bedroom affairs saying that the socialite would 'touch herself' every time they made love.

Vera on the other hand publicly responded to Otile saying that he has a small cassava which did not satisfy her compared to her former lovers.

Betty and Susan were not only friends but business partners at Posh Palace Beauty Parlour and Spa. The launch was fantastic (We were invited). Months into their partnership, they fell out and it was revealed that Betty was just but the 'business' face.

Betty later opened up her business 'Flair By Betty' just opposite her frenemy's business. Susan's billboards were removed and replaced with those of Betty. Kaitanny later revealed that Betty had called cops on her after she refused to give Betty back her passport.

The two have since then become business rivals.

Tanzanians have for a long time been divided into TeamKiba and TeamDiamond. The two started their rivalry when Diamond removed Ali Kiba's lyrics in a song they were supposed to do together.

Fans have been forced to choose who the King of Bongo music is between the two and in 2017, Diamond re-ignited the beef after he referred to Kiba as Cinderella whom people should stop comparing to.

In return Kiba  tweeted "I know that you hate me 100% but I give ZERO F**ks #KingKiba" and "The KING ll always Be a KING. je Umeshakitandika nilale MALKIA wangu wa nguvu ?? #KingKiba"

In the past, Diamond and Ommy Dimpoz were best of friends but later fell out over allegations that Ommy, had started dating Sepetu, the singer's ex-lover. It was sort of going against bro-code. Dimpoz then moved to Ali Kiba and to date, the two have become best of friends. The Baadae hitmaker is even signed under Kiba's label, Rockstar.

Their love brewed when Diamond broke up with beauty queen Wema Sepetu. Zari came in and the two served us couple goals. The rain started beating them when Diamond cheated on zari and in February 2018, Zari broke up with him on Instagram.

In a recent interview, Zari said that she and the singer have not spoken since their break up and that they are not on good terms.

Diamond recently threw shade at her for always creating drama on social media.

After shooting the music video Salome, with Diamond Platnumz, that's where Hamisa and the singer started cheating. Zari exposed Hamisa for leaving what she termed as "cheat" earings in her bedroom. Nine months later, baby Daylan, Diamond's third child was born.

At the start, he refused that that child was his, but when Hamisa leaked photos of the two of them in bed, he retracted his words.

A year later, Diamond and Hamisa were not on good terms, he exposed her for bewitching him so that he can marry her. This was after Hamisa sent Diamond to court for child support issues.

In Uganda, Zari also made headlines after clashing on National Television with Anitah Fabiola. She forced the TV presenter Anita Fabiola to read the winner of the Miss Uganda 2019 which wasn't welcomed well by fans. She was booed!

Zari failed to apologize to the TV presenter who is Hamisa's best friend.

Zari has also clashed with former Miss Tanzania Wema Sepetu for being called "too old" for Diamond Platnumz.

Their collabo Micasa Sucasa was a breakthrough for rapper Cashy who was then dating Khaligraph Jones. Fast forward to 2019, the two moved on after breaking up.

Their beef started off when Cashy exposed the rapper for physically abusing her when they were dating. Khaligraph refused to comment on this, but in an interview, he became very angry when asked about the allegations.

This beef has cooled off for some time, but it created a buzz for their music careers. Willy has in the past been accused of stealing Bahati's songs, however, they had done a song together, which never saw the light of day.

For a long time in the Kenyan hip hop industry, it has been a debate of who is the better Mcee than the other.

When Khaligraph Jones came into the limelight, Octopizzo mocked his English comparing it to a person from Kayole. Khaligraph in returned said that Octo was just afraid that he might steal his light.

In a tweet, Octo responded to a fan saying that he didn't know who Khaligraph "Omollo" was.

From competing on who has the most expensive car to fighting for the highest rank in the music industry, Prezzo and Jaguar might have had the most long-standing beef.

Their beef re-ignited when Prezzo joined Nairobi D, so Jaguar got the opportunity to call him a socialite for being cast as a reality TV star.

In 2017, they, however, buried their beef with a collabo dubbed Timika.

Rapper Nyashinski brewed beef with Radio personality Tuva when he interviewed Taita Taveta governor Granton Samboja. Mheshimiwa had opened up about how he likes the song Kwangwaru by Tanzania’s Harmonize.

In the short video he posted on Instagram, he went on to ask which Kenyan artiste the governor likes, but that’s where the video ended.

Nyashinski felt like Tuva didn't represent Kenyan music and had not reported whom the Kenyan artistes the governor liked but instead highlighted a Tanzanian.

In his response, Tuva said that he isn't the one to choose the songs Mheshimiwa should or should not like. He added that the small Instagram video was to lead the audience to his youtube channel.

While Bobi Wine was going through torture from the Ugandan government, many artistes stood with him except Bebe Cool. He seems to have sided with Museveni and that made his fans very mad to a point they threw bottles on stage during his performance.

Well, his fans were mad after Bebe insinuated that Bobi Wine is faking his torture. He said,

YOU DON’T BEGIN WITH ONE, IF YOU’RE GOING TO USE TWO YOU MOVE WITH TOW AND DO NOT MOEVE HEM AT A GO THEN BRONG THEGS. ITS ONE THEN ONE. IF YOU MOVE WITH TIW, THEN THE LEGS ARE STRONG ENOUGH TO STAND

2. One who cannot walk would opt for lighter shoes and not one of the heaviest shoes men have, Timberland boots.

3.  Finally, he said that he has no cuts and bruises on his face at all.

Femi One And Noti Flow

The song Pilau Njeri was one that really gave Femi One attention in the music game. It was a diss to fellow femcees but Noti Flow did not take it lightly.

Femi called Noti broke, which ignited their beef. Noti then released a response diss in an account to prove the other one wrong.

Cindy, who is a legend in the music industry started beef after she said Sheebah isn't able to battle her on stage when it comes to performing and that her stage presence is horrible.

Sheebah responded by asking a good performer doesn’t have a mansion like hers in Munyonyo.