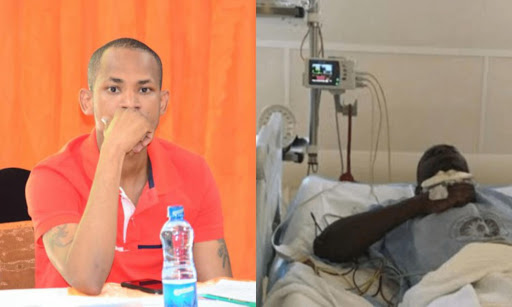 Kenyans online have lashed out at Embakasi East MP Babu Owino, who shot DJ Evolve in the neck early this year at B-Club.

On May 1, he left many praising him for his mathematics prowess. In a Facebook live video, Babu revised form four topics trigonometry, integration, and calculus, leaving many awed.

But according to a section of Kenyans, the controversial politician has been doing PR all over in the media while DJ Evolve was suffering.

In an interview with Jalang'o, Babu Owino said that he paid Sh15 million for DJ Evolve and was already discharged though he was still in hospital.

THE THING THAT HAPPENED IS BETWEEN ME AND GOD AND I CHOSE TO FORGIVE MYSELF. I HAVE BEEN PAYING THE BILLS AND I SETTLED THEM, KSH15 MILLION.

Kenyans are still not happy with him and several took to social media to remind him of the gruesome act he did to the popular disc jockey.

Metet Ambrose We haven't forgotten what you did to DJ Evolve

Allan Kimanthi hear Babu Owino has dazzled y'all with his mathematics prowess. Now can someone ask him to calculate how much shooting DJ Evolve has cost the poor man and his family? Let him break it down to blood, pain and material.

Felicity Trizah Babu Owino is trying really hard to get on peoples good side after shooting DJ Evolve! But no, teaching calculus won't absolve you. Still a basic thug.

Once a Thug always a Thug.

Justice Mugo No amount of PR will cleanse Babu Owino after what he did to Dj Evolve. This man is a Kenyan menace and should not hold any position. We all know his politics back in university, full of violence. We should avoid him like a plague.

Lion Muigai Ukipanda pipilipili huwezi vuna miwa. The soil has no connections! Babu Owino shot DJ Evolve maliciously! Even if Babu calculate nautical per mile into mph with an angle of elevation and gets it right, he remains a swine!

Boring Tweep Babu Owino should understand that till we see Dj Evolve back in the streets we ain't forgetting, we ain't forgiving.